Mashaba and Maimane: not in opposition but pursuing separate initiatives 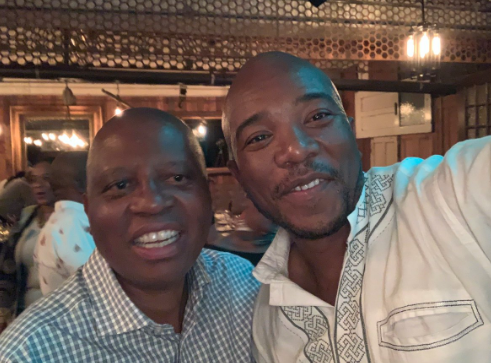 Herman Mashaba, left, is starting a new political party while Mmusi Maimane is focusing on establishing 'a movement for one South Africa'.
Image: Twitter/Mmusi Maimane

Former DA heavyweights Herman Mashaba and Mmusi Maimane have given clarity about their next political moves.

The pair resigned as mayor of Johannesburg and DA leader, respectively, in October last year, citing tensions within the DA.

In December, two months after resigning, they both hinted at joining forces in starting a movement, “The People's Dialogue”.

At the time Maimane confirmed that he and Mashaba were working together, saying they would “charter a way forward where future generations can be served by individuals who place citizens first”.

However, in a recent joint statement, Mashaba and Maimane announced that they were parting ways.

In the statement, Mashaba said he would be starting a new political party while Maimane is said to focus on establishing a “movement for one SA”.

“Since our resignations from the DA in October last year, there has been a great deal of speculation about our individual and shared political futures. It is important that we clarify a number of points in this regard,” read the joint statement

“We both resigned from the DA after we independently came to the conclusion that it is no longer the vehicle that can fix and build an inclusive SA.”

The pair said after launching “The People's Dialogue”, a registered non-profit company that seeks to give ordinary people a voice in shaping the future of SA, more than 13.7m South Africans had been reached across various social media platforms, resulting in close to a million engagements with people expressing their views on the future of the country.

“The message from the participants in the initiative has been clear. While dialogue is important, it must lead to action and a viable political alternative. As such, Herman has made the decision to move towards the formation of a new political party that could contest the local government elections in 2021.”

Maimane will focus on the establishment of a movement for one SA, “an initiative seeking to build a broad coalition of political parties and civil society formations around a shared set of values and principles that could collectively work to fix SA and realise our country's potential”.

“Mmusi has spent the past three months traversing the country, engaging potential allies and mobilising community support. Similarly to Herman, he has experienced the frustration felt by ordinary South Africans from all walks of life who believe that the current political system has failed them.”

Mashaba and Maimane said both initiatives had a common goal of fixing the country and building one that works for all its people.

They said they don't see the two initiatives as being in competition but rather as complementing one another.

The formation of the new political party by Mashaba is still “under discussion, although these discussions are at a very early stage”.

“The movement for one SA will continue its work to bring change and sees no clash of ideas with the project being undertaken by Herman. Our engagements will continue as we work together to fix our country and bring the change we need.

“We would like to emphasise that we have the deepest respect for one another and continue to support each other’s respective, independent efforts to deliver real, transformational change in SA.”

.@MmusiMaimane and I would like to clarify a number of issues following speculation in the media. We contine to engage and support each other as we work together to fix South Africa and bring the change we need. pic.twitter.com/jDm0GFVE21