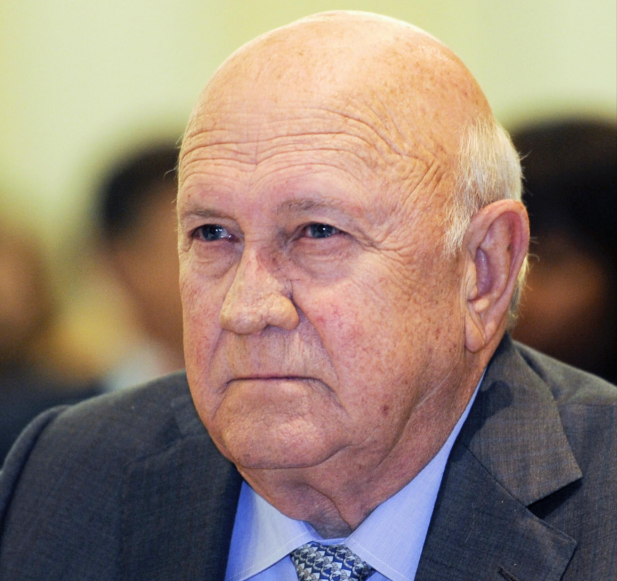 Former president FW de Klerk was called an apartheid apologist and 'murderer' by the EFF during Sona on Thursday.
Image: Loanna Hoffmann

The EFF has shared a video of former president FW de Klerk saying more people died because of genocide than due to apartheid.

The video is from two weeks ago.

The former president was reflecting on his 1990 decision to lift the ban on liberation movements and free political prisoners, including Nelson Mandela.

He said while masses were killed during apartheid, more died due to genocide, a statement which saw many accuse him of trying to play down the criminality of apartheid.

“Apartheid cannot be compared with genocide. There was never genocide under apartheid. Many [more] people died because of black-on-black violence than because of apartheid.”

He acknowledged that the apartheid regime had a hand in inciting black-on-black violence, but also said he took steps to end it.

“Absolutely, I took steps about that, I appointed the Goldstone Commission and we fired or put on retirement more than 28 senior officers in the defence force. I called police and said 'you are no longer involved in politics, your task is to safeguard the people of SA'. We did take steps.”

The full interview is on SABC Online.

[MUST WATCH]: This is why the EFF in Parliament demanded that De Klerk be removed from the house. #SONA2020 pic.twitter.com/vt71kw5jqq

“My submission speaker is that, please, for us to have peaceful proceedings, we should ask a man with blood on his hands, to leave this parliament because he does not belong here.”

Modise dismissed the EFF's motion and suspended proceedings after more than an hour of disruptions by the party. The EFF staged a walkout after the Sona reconvened.

The release of Nelson Mandela in 1990 was not an act of kindness on the part of then-president FW de Klerk, President Cyril Ramaphosa said on Tuesday.
Politics
1 year ago

WATCH | #SONA2020 top talking points: All you need to know

EFF walks out of Sona

The EFF walked out of parliament on Thursday night after delaying President Cyril Ramaphosa's state of the nation address for more than an hour.
Politics
1 year ago