By Qaanitah Hunter and Sthembile Cele 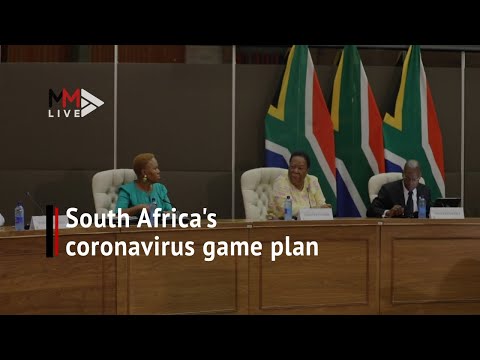 As part of the state of national disaster, the government has announced a number of drastic and urgent measures to deal with Covid-19.

At least 15 government ministers addressed journalists on Monday, one day after President Cyril Ramaphosa announced a state of national disaster.

The ministers explained in more detail how these urgent measures will affect South Africans.

Health minister Zweli Mkhize, who led the briefing, said SA was determined to contain the virus and arrest the outbreak.

“These measures are to reduce the spread of the virus and flatten the curve,” he said.

Education minister Angie Motskhega said school closures as a result of the coronavirus would affect 10 school days and be effected on Wednesday as part of the government’s plan to deal with Covid-19.

Motshekga said they appealed to cabinet to give them until Wednesday to avoid an abrupt end to the schooling term.

The new school calendar will see a reduction in the mid-year holiday by a week, and three days in the September school holiday.

She said because schools were meant to close anyway, government was not concerned about nutrition programmes and feeding schemes affecting pupils.

She said parents must take charge of their children.

He said a team of vice-chancellors and college principals would meet on Tuesday to come up with a comprehensive way forward.

Two universities have so far been affected by confirmed cases of Covid-19. They are Wits University and the University of Cape Town, which has shut down the campus.

“We are not yet planning a shutdown,” Nzimande said, adding they had to consider where students who lived in residences would go.

He said they would assess the situation to determine if a complete shutdown of all universities was required.

Home affairs minister Aaron Motsoaledi said 8,339 visas issued to Chinese citizens in January and February would be revoked, and 429 visas issued to Iranians in the same period would no longer be valid.

The government has imposed travel bans on eight countries. The other six are Italy, France, Germany, US, South Korea and the UK.

“For the remaining six countries, we will now start requesting visas. It is through those visas that we will keep watch over those visitors,” Motsoaledi said.

He said anyone from those countries currently residing in SA would not be affected.

Motsoaledi said people travelling from medium-risk countries, including Portugal, Hong Kong and Singapore, would require medical screening as part of their visa application to SA.

Detailing the restrictions to ports of entry and imminent closures, Motsoaledi said this  would not include commerce or the transportation of goods.

“[At] the 11 airports, there will be no change, just heightened vigilance,” he said.

Two of the eight seaports affected, Saldhana Bay and Mossel Bay, will allow cargo but not the movement of passengers or ship crew changes.

Thirty-five land ports will be affected but Motsoaledi said the ones closed were not for commercial use.

Motsoaledi said South Africa would not close its only border post with Zimbabwe, Beitbridge, as it was a gateway to the rest of Africa. That border post, he said, would receive 20 extra border officials.

Finance minister Tito Mboweni moved to allay fears around the government's capacity to fund the infrastructure necessary to contain the coronavirus.

Mboweni said a co-ordinating group consisting of the National Treasury and the national department of health were discussing ways to find the money needed to fight the virus.

“We stand ready to do two things. One, funds available within the national disaster fund which will be immediately available. I don’t want to mention amounts in case prices begin to change. Funds have been set aside,” he said.

“As the situation develops we will need to set aside further funding. That means we will have to reduce programmes throughout the government system by reducing the allocated amounts so we can shift these funds towards this project.”

He said his main concern was ensuring the country was not in a situation where it was unable to procure critical items, such as testing facilities, in the wake of the crisis.

Minister of trade and industry Ebrahim Patel said the government had begun the work of securing supplies of basic hygiene and medical stocks.

He said meetings at Nedlac on Monday afternoon would urgently attend to the workplace environment, and measures that will have to be taken to put a cap on the spread of the virus, particularly in open environments housing large numbers of people.

Among some of the areas Patel and his team were looking at were ways to deal with “an anticipated economic slowdown”, trade disruptions and the impact on the global economy.

In the workplace, efforts would start for wide-scale sanitisation of work spaces, encouraging social distance in canteens and the possibility of clocking-in arrangements.

He said workplace medical facilities may need to be kitted out, and used not just for employees but also to bolster efforts in surrounding communities. He said mining companies had already indicated a willingness to avail their facilities.

Engagements at Nedlac would also bring clarity on issues such as compensation for employees who contracted the virus while on the job and arrangements for sick leave, quarantine and any other special arrangements.

Police minister Bheki Cele said the police may regulate the sale of alcohol and shutting down of bars and shebeens under the national state of disaster.

“We may stop the movement of alcohol, whether you are licensed or unlicensed.”

As part of the regulations governing a state of disaster, the state can control the movement and sale of alcohol.

Cele said as part of the limiting of rights under the state of national disaster, the police may not have the luxury of acquiring search warrants before they affected arrests.

He said despite Covid-19, policing would still happen.

“If we arrest you we can’t arrest you through e-mail. You have to be there. It will happen. It doesn’t mean we can’t come close to you,” Cele said.

He said while breathalysers in the Ethekwini municipality had been suspended to prevent the spread of the virus, law enforcement officers would still check for drunk drivers.

“We want to ensure the safety of our members who are at the front desk,” he said.