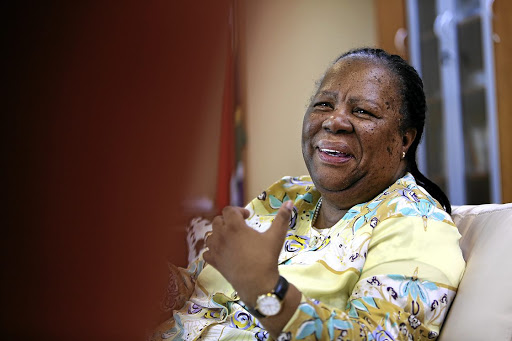 At least two cabinet ministers were self-isolating after an official who accompanied them on a trip to the Republic of Congo two weeks ago tested positive for Covid-19.

State security minister Ayanda Dlodlo and international relations minister Naledi Pandor have been in isolation since the weekend.

Pandor and Dlodlo have subsequently both tested negative.

The pair travelled to Oyo in the Republic of the Congo for an AU meeting on the situation in Libya. On their return, an official working closely with Pandor tested positive for Covid-19.

Pandor subsequently travelled to Namibia last week where she attended the presidential inauguration.

“Yes she tested and her results came back negative. All her staff are in self-isolation as we needed to sanitise the office,” her spokesperson, Lunga Ngqengele, said.

Dlodlo is said to be in good spirits and opted to be on the side of caution.

“Yes, we can confirm that minister Dlodlo travelled to Oyo in the past two weeks and upon learning of the person travelling with them testing positive, she took the decision to self-isolate and test for the virus,” her spokesperson, Mava Scott, said.

He said Dlodlo ordered that her office take extra measures and be sanitised.

Defence minister Nosiviwe Mapisa-Nqakula - who had also accompanied her two colleagues - is apparently not self-isolating as she attended a press briefing on Wednesday.

On Thursday, the presidency confirmed that President Cyril Ramaphosa tested negative for Covid-19, a day before the country is expected to go on lockdown.

Infections on Wednesday stood at 709.

Both Dlodlo and Pandor are part of the national command council led by Ramaphosa, which is dealing with the government’s response to the outbreak.

Gauteng Premier David Makhura has begged residents of the province not to flee to their rural homes because of the national lockdown meant to ...
Politics
2 years ago

Saffers’ mental health taxed by Covid-19, but there are ways to cope

South Africans with mental health conditions may be more prone to potential relapses and increased distress as the Covid-19 pandemic tightens its ...
News
2 years ago

Hundreds of doctors are offering free telephonic consultations to anxious South Africans with possible Covid-19 symptoms through a helpline that went ...
News
2 years ago