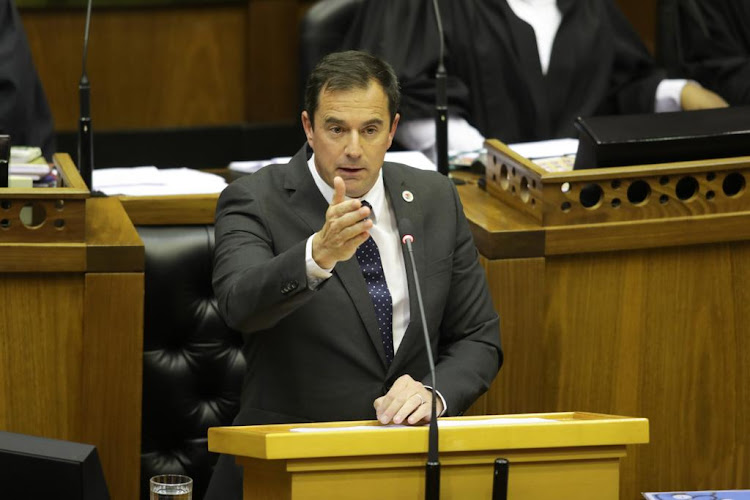 DA leader John Steenhuisen has warned against 'nanny-state fantasies' as the country prepares for level 4 of the lockdown.
Image: Esa Alexander/Sunday Times

The DA has threatened to haul government before to court over its decision to impose a national curfew due to come into effect on Friday as part of the level four lockdown measures.

The official opposition party in parliament on Wednesday said government's decision to impose a national curfew between 8pm and 5am from Friday resembled a "nanny state fantasy" on the part of President Cyril Ramaphosa's administration.

The DA has also slammed government’s flip-flopping on the sale of cigarettes after it reversed its decision announced on Saturday to allow the selling of tobacco products.

Alcohol and cigarettes will not be allowed under level 4 restrictions, Nkosazana Dlamini-Zuma said on Wednesday night.
News
2 years ago

In a statement issued on late on Wednesday night following a press conference by ministers within cabinet's national command council on the coronavirus, DA interim leader John Steenhuisen said the country had now being turned into a nanny state.

This was after government downgraded the 35-day national lockdown from level five to four to allow for partial resumption of economic activity.

But Steenhuisen was not impressed by the introduction of curfew, and the continued banning of cigarette sales and alcoholic products among other things.

“The curfew demonstrates this best of all. The DA will consider challenging its legality. President Ramaphosa’s cabinet seems to be indulging in all its nanny-state fantasies. It may soon find itself having to justify these in court, where reasonableness still prevails,” said Steenhuisen.

He said the DA believed it was irrational that government was continuing with the ban on services such as hair-salons and the unlimited sale of hot-foods.

“By way of example, no-one will now be able to legally sell or pay for a haircut, which will have devastating consequences for many working class people who run salons and barbers out of their homes to support their families. The DA’s Level 4 would allow hairdressers to operate, as long as they can meet a specified level of safety.

“Some of the decisions are draconian, such as the continued ban on smoking and sale of hot food. Will sugar and fatty foods be next? The president told us smoking would be allowed in level 4 – but the command council has now backtracked on this.”

The party which has been calling for a “smart lockdown,” argues that level four is a “copy and paste,” of level five.

The DA are not the only organisation to oppose the move to maintain the cigarette ban. A group which calls itself, “Tax Justice South Africa” says that the decision was a “life endangering economic sabotage.”

The Tax Justice South Africa claims the ban on cigarettes and other tobacco products resulted in a daily loss of R35m to the fiscus while the black market continue to sell to estimated 11 million desperate smokers.

It said in a tweet on Wednesday night that it would mount an urgent court challenged against the decision not to allow cigarette sales.

"Let a court of law adjudicate on this issue once and for all.”

Tourism activities likely to be grounded until December: minister

Tourism minister Mmamoloko Kubayi-Ngubane is exploring the possibility of “district isolation” to bring some life to the tourism industry.
Politics
2 years ago

'We won't give credence to some attention-seeking political party': Safa on DA's calls to suspend Danny Jordaan