'This brouhaha should not even be there': Ramaphosa on cigarette u-turn 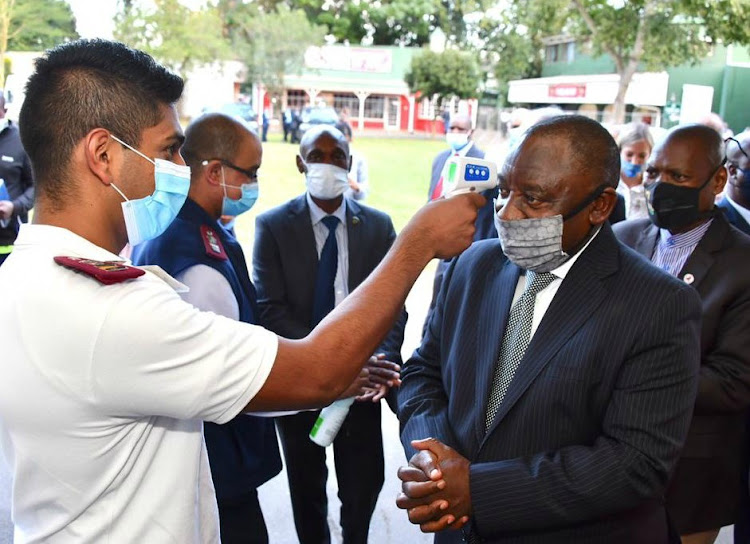 President Cyril Ramaphosa has his temperature checked before touring the quarantine site at the Royal Showgrounds in Pietermaritzburg on Tuesday.
Image: The Presidency

President Cyril Ramaphosa said on Tuesday that government backtracked on the decision to allow the the sale of cigarette's under level 4 lockdown after members of the public raised concerns.

He was addressing the media at the Royal Showgrounds in Pietermaritzburg in KwaZulu-Natal.

The showgrounds has been identified by government as a quarantine site consisting of 269 beds.

Ramaphosa was concluding a visit to the province to assess its state of readiness to deal with the Covid-19 pandemic.

Ramaphosa said while he had originally announced the sale of cigarettes would be permitted under level 4, people had raised concerns and government listened to them and reexamined its position.

Cigarette trader Adriano Mazzotti has denied allegations that he “may have had an influence" on the government's decision to ban tobacco products ...
News
1 year ago

"It so happens that it was done on a very controversial issue. This is by no means the only issue where we've listened to our people and changed tack," he said.

He said it was a matter decided on collectively.

"Listening to our people, we heard the serious concerns raised by our people, health wise, and we decided we should reexamine that. We discussed it and changed our position," he said.

Ramaphosa said there was nothing wrong with anyone changing their minds.

"You can ask yourself whether you've ever changed your mind on anything and you'll find  you've done it more times than just sticking to a position you may have taken originally. So this brouhaha on this issue really should not even be there," he said.

He said nobody in government was trying to pursue any vested interest regarding the ban.

"The only interest we are pursuing is the health and interest of our people, that is all. Finish and klaar," he said.

Asked about his views on members of the tobacco industry taking government to court over the banning of cigarettes, Ramaphosa said he had faith the country's courts would assess the matter and make a decision accordingly.

@CyrilRamaphosa responds to the #Tabacco industry taking legal action against the government over the sale of cigarettes. He says he has confidence in SA's courts in examining matters and disputes properly. @TimesLIVE #Covid19inSA #CigaretteBan pic.twitter.com/CqNsQ8IM8T

"We live in a free country and the content of our democracy is such that if you feel aggrieved, you are entitled to take your grievance to the courts. That's what they've elected to do and we still have great confidence in the courts, that they are able to examine matters and disputes properly," he said.

On Monday, the Fair-Trade Independent Tobacco Association (Fita) filed papers in the Pretoria high could to pursue legal action against government. It wants to set aside disaster regulations and declare tobacco products as essential goods.

Ramaphosa said he was pleased with KZN's efforts to flatten the curve, specifically in terms of social distress.

He said the government would now gear itself towards recovery of the country's ailing economy.

President Cyril Ramaphosa has reiterated that the country has to plan and be prepared for the worst of the coronavirus pandemic, which is yet to come.
Politics
1 year ago

No rules exist to direct cabinet on how to organise its work to ensure the best possible coordination of its members and the ideal means of ...
Politics
1 year ago

Jackson Mthembu said government has valid reasons for continuing the ban on the sale of cigarettes.
News
1 year ago