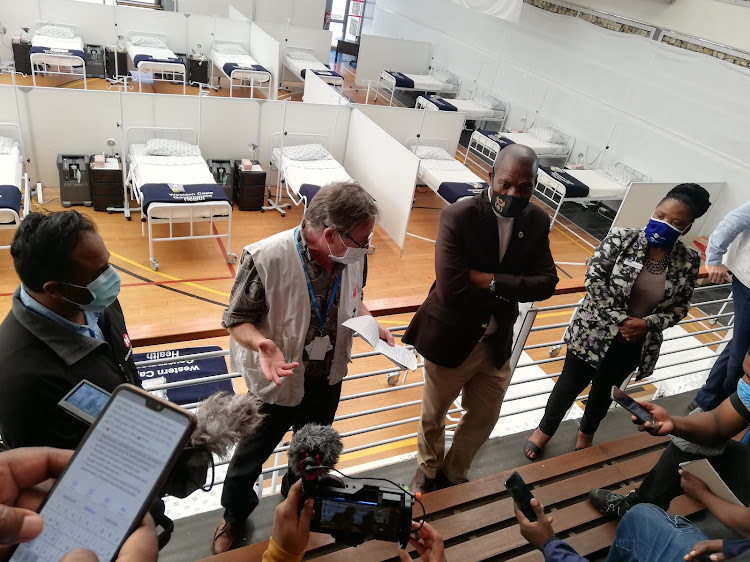 Health minister Zweli Mkhize is briefed by the head of MSF in the Western Cape Dr Eric Goemaere during a site visit to the Khayelitsha Covid-19 field hospital. Next to him are Western Cape health MEC Nomafrench Mbombo and other health officials.
Image: Sipokazi Fokazi

With one in nine of those who are tested in the Western Cape being positive for Covid-19, the province could soon quarantine those who live in high-risk areas and are at risk of complications.

This includes the elderly and those with underlying conditions, health minister Zweli Mkhize has hinted.

Mkhize, who is currently in the Western Cape to check preparedness as South Africa’s Covid-19 epicentre, said the province - which has over 65% of the country's cases - will determine whether the country will defeat Covid-19 or not.

After visiting four of the province’s Covid-19 field hospitals - including the Cape Town International Convention Centre (CTICC) facility, the biggest facility in the province - Mkhize said he was impressed and encouraged at how innovative the provincial government has been to prepare for the Covid-19 peak.

Preparatory work at the 862-bed CTICC facility is expected to be completed on Friday, in time for its opening on June 8.

“What we’ve also been impressed with is the speed of response because we now need to finish our beds quicker than we initially thought we would need them. That means that the work that is going on is really gearing up for the huge surge and storm that we still expect is going to be felt in this part of the country. And off course it will come through different parts of the country,” he said.

In addition to efforts to increase hospital beds in the province Mkhize said special focus will be directed to the province’s most vulnerable: those with comorbidities.

“There is also going to be an effort to take those who might be at risk or vulnerable and put them into quarantine where it’s possible, so that you can actually reduce the risk of those who can be exposed,” he said.

Mkhize said there is already a clear picture of where these vulnerable people live, and health teams will be visiting their communities to determine who these people and where they reside.

“Out of that process they will then be visited and be tested before they even get sick or before they get infected, so that we are able to really move ahead of the infection curve,” he said.

Mkhize also visited the now-complete 60-bed Khayelitsha temporary hospital, which has been built by Medicins Sans Frontiers (MSF) at the City of Cape Town's Thusong Centre. It will be operated in partnership with the provincial health department.

Health MEC Nomafrench Mbombo and head of health in the Western Cape, Keith Cloete, also took Mkhize and new health director-general Dr Sandile Buthelezi to the quarantine and isolation facility, which has been sponsored by Old Mutual, as well as the Brackengate site, where work is currently under way on a 300-bed temporary hospital. 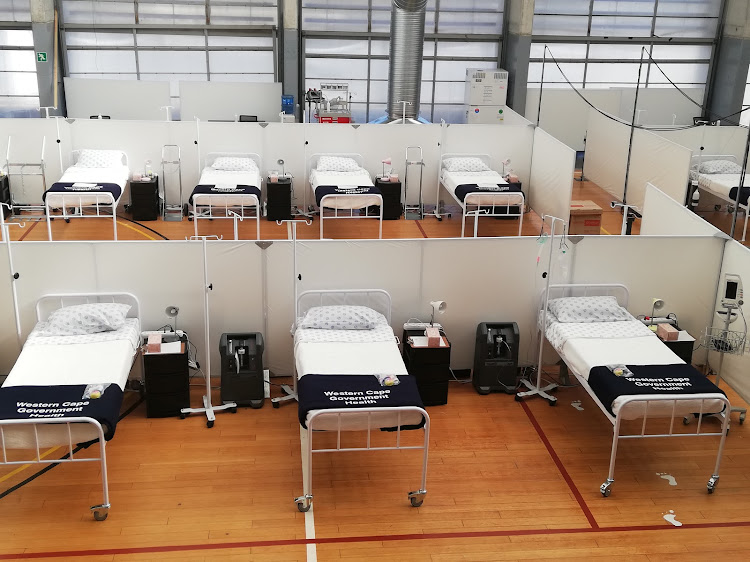 The 60-bed Covid-19 hospital in Khayelitsha is expected to treat residents of this township closer to their homes. But with the increase in hospital beds in this province there's now a dire need for additional healthcare workers.
Image: Sipokazi Fokazi

Out of more than 742,000 Covid-19 tests done nationwide, Mkhize said the Western Cape has done the second most after Gauteng. KwaZulu-Natal was in third place and the Eastern Cape fourth.

The Western Cape has the highest number of positivity rate “with one in every ninth person turning to be positive, which gives the fact that there is a lot more of positive cases in the province”.

As a result of the sheer number of positive cases, Mkhize said resources have been shifted in the country. The Western Cape will be prioritised in testing when the country gets adequate supplies of testing kits.

“Because of the 65% of people being positive in this province, we want to clear as much of the backlogs that we are getting as possible,” he said.

Mkhize also called for registered nurses and doctors to avail themselves for employment in the public services, saying the Western Cape is in dire need of healthcare workers. So far the province has recruited more than 800 nurses, but with more nurses testing positive for Covid-19, there is still a great need to increase staffing levels.

“We are also calling those who recently retired to come on board. There is a way within health services for those who may be at higher risk profile to be put in areas where the risk doesn’t become a challenge,” he said.

As Covid-19 deaths in the Western Cape reached 472 yesterday, the province has recorded more than three-quarters of SA's fatalities.
News
1 year ago

For music lovers, Hall 4 at Cape Town International Convention Centre is better known as Kippies, the biggest and most vibrant venue at the annual ...
News
1 year ago

The Western Cape, home to almost two-thirds of confirmed Covid-19 cases, is giving the rest of SA a taste of things to come.
News
1 year ago