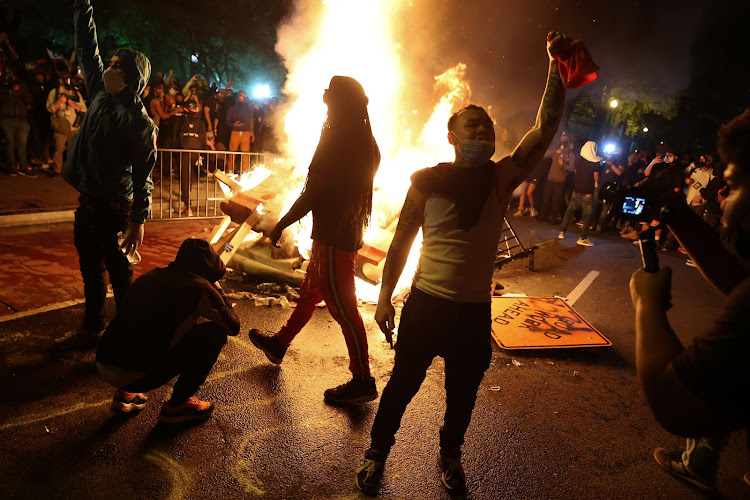 Protesters rally around a bonfire in the midst of protests against the death in Minneapolis police custody of George Floyd near the White House in Washington DC on May 31 2020.
Image: REUTERS/Jonathan Ernst

The ANC has called on “all Americans and their government” to resolve the “racial impasse” in the wake of the death of George Floyd, a black man who died after being physically restrained by a white police officer.

The ANC also called on the SA government led by President Cyril Ramaphosa, to “engage with the American government” through diplomatic channels to “diffuse racial tensions and build social cohesion among different races”.

The party called for calm after riots ignited by Floyd's death broke out across the US.

“While we note the action taken by American authorities in charging one of the officers who was caught on camera kneeling on an unarmed Floyd, it is equally concerning that incidents of police brutality against African American citizens are on the increase.

“The cascade of recent cases — Ahmaud Arbery, jogging while black, Breonna Taylor, sleeping while black, and Floyd, encountering police while black — has sharpened the focus on inescapable realities that American society places a perilously low value on black lives,” the ANC said in a statement on Monday night.

It said it was “deplorable” that almost 70 years since racial segregation was abolished in the US, people of colour “are still routinely slaughtered for the colour of their skin”.

“The ANC fought and defeated racial supremacy and will not be cowed to remain silent in the face of the lynching of black people wherever they manifest,” the party said.

The rapper stood by his comments after being challenged.
TshisaLIVE
2 years ago

Fires burn near White House in violent US protests

Fires burned near the White House, stores were looted in New York City and Southern California, and a tanker truck drove into marchers in Minneapolis ...
News
2 years ago