'I was totally unaware the video was on': Public works official on attending online meeting topless 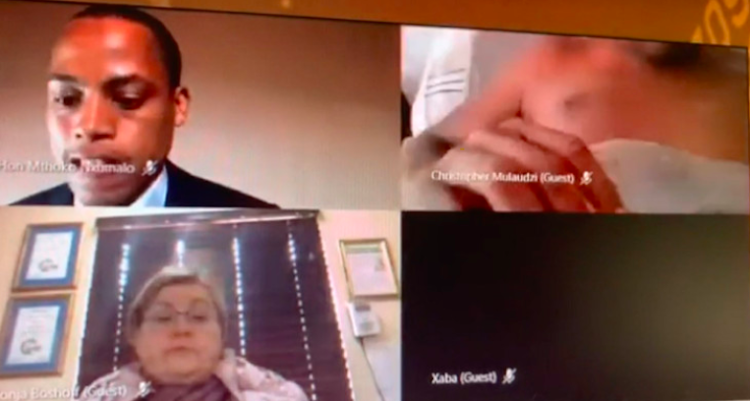 Christopher Mulaudzi, a public works official who attended an online meeting topless while in bed, has apologised.
Image: Screenshot

Public works and infrastructure official Christopher Mulaudzi has issued an apology to all affected stakeholders after he was taped topless during an online meeting.

The department condemned Mulaudzi's actions, and said the incident was viewed in a serious light.

“The official was caught on video lying on the bed, topless and wearing only shorts while the meeting was in session, behaviour which the department strongly condemns as it undermined the decorum of the meeting.”

In an apology letter seen by TimesLIVE, Mulaudzi acknowledged the incident.

He said although he joined the meeting as a member of the public and not as a representative of public works or the Independent Development Trust, his behaviour was unprofessional

“Although the hearing was open to the public and of immense public interest, it was unprofessional of me to join the proceedings from the privacy of my bedroom,” he said.

“I was totally unaware the video was on and was convinced I had taken the necessary precautions to deactivate it.”

He said his actions fell short of the professional standards and conduct expected of any employee.

“This incident caused great embarrassment and harm to his colleagues, the department of public works, the minister and deputy minister, and has undermined the decorum of the national legislature, especially the parliament committee on public works and infrastructure,” said Mulaudzi.

For 'Jennifer', working from home didn't go as planned
Lifestyle
1 year ago

Health MEC in the Eastern Cape Sindiswa Gomba has apologised for her utterances during an online briefing on the coronavirus in which she used the ...
News
1 year ago

'Zoombombing' on its way out, plus tips on how to ace video conferencing and save data

“Zoombombing” looks set to be a thing of the past - Zoom has just announced that it soon allow all users of its videoconferencing software to enable ...
News
10 months ago
Next Article