'Our stance is clear: we support the people of Palestine': Ace Magashule 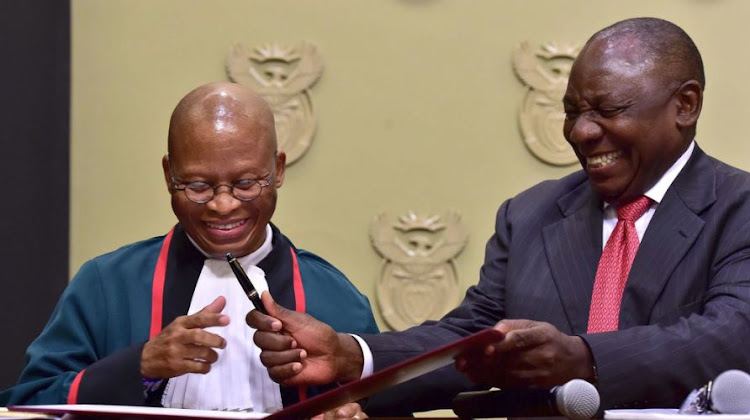 Mogoeng Mogoeng being sworn in as chief justice by then president-elect Cyril Ramaphosa in February 2018. Ramaphosa has been tasked by his party with reining in Mogoeng over his controversial comments on Israel.
Image: The Presidency of the Republic of South Africa/Flickr

This was revealed by ANC secretary-general Ace Magashule at a post-NEC briefing at the party’s headquarters in Luthuli House in Johannesburg on Wednesday afternoon.

The decision of the NEC comes a week after Mogoeng appeared in conversation with the chief rabbi discussing Israel in which he appeared to express his sympathy for the country.

Last week the ANC announced that it wanted the speaker of parliament Thandi Modise to have a “high-level discussion” with Mogoeng over his comments, which seemingly contradicted the government’s position of solidarity with the people of Palestine.

The South African Zionist Federation has condemned the ANC and others who criticised chief justice Mogoeng Mogoeng for "endorsing" Israel.
Politics
2 years ago

“We have noted that in terms of the constitution of SA, we are a secular country which recognises all religions. We have the executive, the judiciary and the legislature and we have said the president and speaker of parliament will need to engage the chief justice on these issues,” said Magashule on Wednesday afternoon.

“Our stance is clear: we support the people of Palestine and self-determination. We continue to tell Israel that they cannot continue as they have been.”

The ANC resolved during its 2017 elective congress at Nasrec to downgrade the South African embassy in Israel.

The EFF has called on Mogoeng to retract and apologise for his comments, while lobby group Africa4Palestine has threatened to lay a formal complaint against him with the Judicial Service Commission (JSC).

Chief Justice Mogoeng Mogoeng has received support from an unlikely ally, a leader of a tribe in KwaZulu-Natal.
Politics
2 years ago