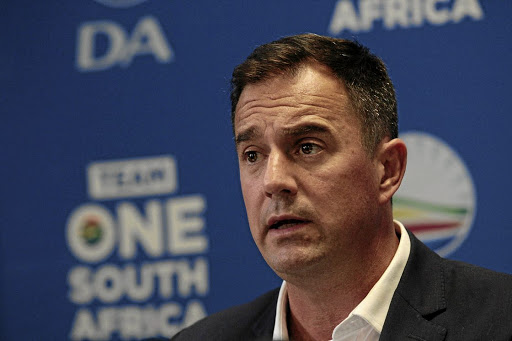 John Steenhuisen says the Disaster Management Act does not pass constitutional muster because it has no provision for parliamentary oversight.
Image: Veli Nhlapo

DA leader John Steenhuisen says his party will not halt its bid to challenge the constitutionality of the Disaster Management Act despite its setback in the Constitutional Court.

On Wednesday, the apex court threw out the party's urgent application for direct access to the court to challenge the act, which empowers President Cyril Ramaphosa's government to declare a national state of disaster.

The state of disaster was used to impose a national lockdown in March, which is still in force, and create the national coronavirus command council — a powerful subcommittee of the cabinet which makes the lockdown rules.

As the economic impact of the lockdown took hold, the DA questioned the legality of the act and the creation of the command council.

Steenhuisen said in a statement on Thursday that his party would not give up the fight.

“What this now means — having been denied direct access to the country’s highest court — is that we will have to make our way more slowly through the court system in order to contest an issue with clear and urgent constitutional implications.

“This will delay our action, but it most certainly will not deter us,” said Steenhuisen.

He said it was the party's view that the Disaster Management Act did not pass constitutional muster.

“The reason for this is that it has no provision for parliamentary oversight, and this means that the legislative and executive functions of the state have effectively been merged. Government’s national coronavirus command council [NCCC] now fulfils both these roles,” he said.

He said the act had empowered the minister of co-operative governance & traditional affairs, Nkosazana Dlamini-Zuma, to issue directives with no parliamentary oversight.

Steenhuisen said the power given to Dlamini-Zuma meant she could give directives that included extending the state of disaster indefinitely.

“Not even a state of emergency places such unfettered and indefinite power in the hands of a minister or the executive.

“The president has asked South Africans to give up many of their rights for the fight against Covid-19, and they have. But this has enabled the Cogta minister to concentrate huge power in her own hands, while circumventing the legislative branch of government entirely,” said Steenhuisen.

He said the reason his party applied for direct access to the Constitutional Court was to urgently remedy the flaw and that was still the DA's aim but it would now take longer to achieve that.

Co-operative governance & traditional affairs minister Nkosazana Dlamini-Zuma can appeal against the blanket declaration of invalidity of SA’s ...
Politics
1 year ago

The high court has dismissed a bid by Mmusi Maimane’s One South Africa Movement to set aside the decision to move from lockdown level 4 to level 3 ...
News
1 year ago

SA’s economy shrank for the third consecutive quarter, at the start of this year, testament to the difficulties it faced even before the onslaught of ...
Business Times
1 year ago