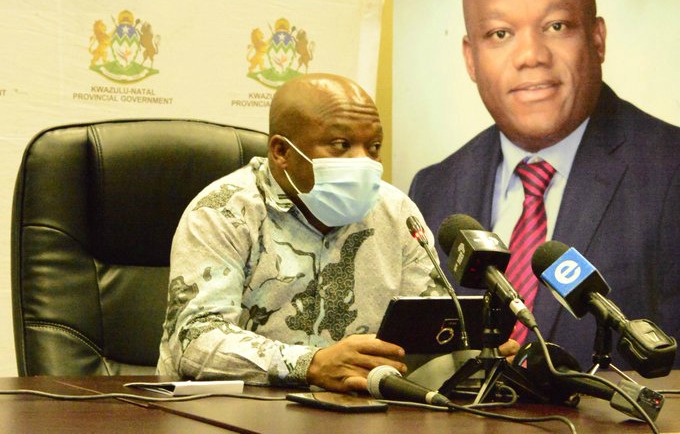 Sihle Zikalala briefed journalists on Tuesday on the procurement of blankets and PPE by the provincial department of social development. More than 43,000 blankets sit in storage.
Image: Supplied

Investigations into the awarding of two tenders to supply blankets for the homeless and personal protective equipment (PPE) have uncovered irregularities by the KwaZulu-Natal government of nearly R30m.

And it has emerged that more than 43,018 blankets procured by the provincial department of social development as part of the Covid-19 relief sit in storage and have not been delivered to those in need.

This was revealed by KZN premier Sihle Zikalala on Tuesday during a report on the findings of three investigations into the procurement of PPE and blankets by the department. Zikalala said two investigations into tenders awarded by the department were launched in April after several allegations emerged of the irregular procurement of blankets worth R22m and PPE worth R19m.

KZN schools' opening in doubt as 60,000 pieces of PPE unaccounted for

Millions of rands worth of personal protection equipment has mysteriously gone missing in KwaZulu-Natal.
News
2 years ago

“From this observation, the investigators discovered that more than 43,018 blankets were left in storage centres with uncontrolled access, and some have been damaged and unaccounted for amounting to possible fruitless and wasteful expenditure as per the Public Financial Management Act,” said Zikalala.

The investigation revealed that the department had sourced blankets from four service providers for between R350 and R599 each - and that there was no record provided to prove that the decision to procure the blankets was informed by a needs analysis.

“The approximate financial loss to the department as a result of the misrepresentations amount to R15,808,000.”

"Owing to the seriousness of the allegations, in April KZN PEC resolved to assign @KZNTreasury to investigate alleged irregularities in the procurement of PPE worth R19-million and blankets worth R22-million by @KZNDSD. This included hand sanitizers, pocket wet wipes etc." pic.twitter.com/oEO0PpxY84

The damming investigation also found that the department made irregular payments for PPE to the tune of R13.6m - and that proper procurement procedure was not followed.

“The investigation concluded that all payments made to the service providers are irregular to the tune of R13,630,229.50. Had the department applied the regulated prizes and processes correctly, it would have saved R2,231,996.21,” said the premier.

The report revealed that in some instances quotations were changed three times, with quantities being reduced each time but not the pricing per unit, said Zikalala.

“The investigation noted that some service providers were paid in full on May 4, while the delivery of goods happened on May 11. It is an anomaly to pay for services not rendered but effect payment in advance.”

The investigation recommended that disciplinary action be taken against the chief financial officer, the acting director and director-general, as well as others in the department.

When asked about possible criminal action, Zikalala said once they have finalised the investigation they would be working with law enforcement.

“There is a case that has been opened already. Once that process is concluded, we will ensure that these service providers are banned and cannot work for the government again,” he said, adding that they would be working to recoup some of the money.

Zikalala added that there was nothing in the investigation that indicated any wrongdoing on the part of social development MEC Nonhlanhla Khoza.

The investigation also looked into the procurement of PPE in the department of education and found no irregularities in the process.

The Hawks national clean audit task team have conducted search and seizure operations at the homes of eThekwini municipal officials alleged to be ...
News
2 years ago

ANC branches aligned to corruption-accused former eThekwini mayor Zandile Gumede are demanding a total dismissal of the case against her, ahead of ...
Politics
2 years ago

The six people accused of stealing R5.7m in a UIF fraud and money-laundering scam over Covid-19 relief payments were granted R5,000 bail each on ...
News
2 years ago