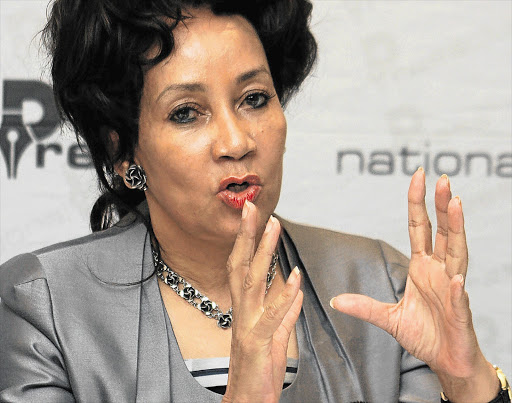 Human settlements, water and sanitation minister Lindiwe Sisulu told parliament on Thursday that she was winning the battle against corruption in her department.
Image: Gallo Images

Human settlements, water and sanitation minister Lindiwe Sisulu told parliament on Thursday that she was working hard to root out corruption in her department.

Delivering her budget vote speech for water and sanitation, Sisulu said her department was taking officials who were implicated in corruption in both her department and water boards to task.

“When we came in, we found a department that no longer enjoyed the confidence of the people it served, having been eroded by a number of cases of corruption. In essence I was told I inherited a bankrupt department with problems accumulated over many years,” she said.

“In summary, this is what the portfolio committee instructed me to do in the debate: sort out this department and its finances.”

When Sisulu took over, the department was separate from human settlements and it had been dogged with numerous allegations of corruption related to water projects, including the alleged looting of a R2bn involving a water tender in Lephalale, Limpopo.

Levubu clinic outside Louis Trichardt, Limpopo, had been relying on a generator to supply power and water to the facility since September last year.
News
1 year ago

Sisulu said she had heeded calls to root out corruption and established a stabilisation committee in her department.

“Within the committee is a disciplinary unit that is dealing with 166 cases, emanating from the auditor-general’s annual reports over a number of years. These cases are in an advanced stage and ongoing as we put in place the necessary support structures to ensure there is no disruption of the work of the department.

“The committee is taking disciplinary action against officials who are implicated in forensic investigation reports, as per the recommendations that were made in those reports.”

Sisulu said the outcomes of such cases after disciplinary action were as follows:

She said she has also ordered an investigation into irregular expenditure in her department, which amounted to R31bn.

Human settlements minister Lindiwe Sisulu believes intelligence operatives are being used to frustrate her efforts to clean up corruption in the ...
News
1 year ago

“In the course of the investigations, the boards of Lepelle and Amatola Water placed their CEOs on suspension and have now commenced with a disciplinary process against them. Both executives have received their charges and dates for the hearings have been set during the month of August.”

The minister said she also considered findings and recommendations from investigations into both Amatola and Lepelle boards and decided to pursue civil and criminal charges against its CEOs.

“Both the boards of Amatola and Lepelle have been placed under administration to ensure that we can stabilise them as we continue with the cases.

“The work of the SIU, the Hawks and the whole justice system will assist the department to find closure on all these matters, ensuring that all officials understand that corruption will no longer be tolerated.”

Human settlements minister Lindiwe Sisulu has vowed to take the DA-led governments of Cape Town and the Western Cape to court should forceful ...
Politics
1 year ago

The Eastern Cape government had a tough time convincing members of parliament that it had things under control in its response to Covid-19 in the ...
Politics
1 year ago