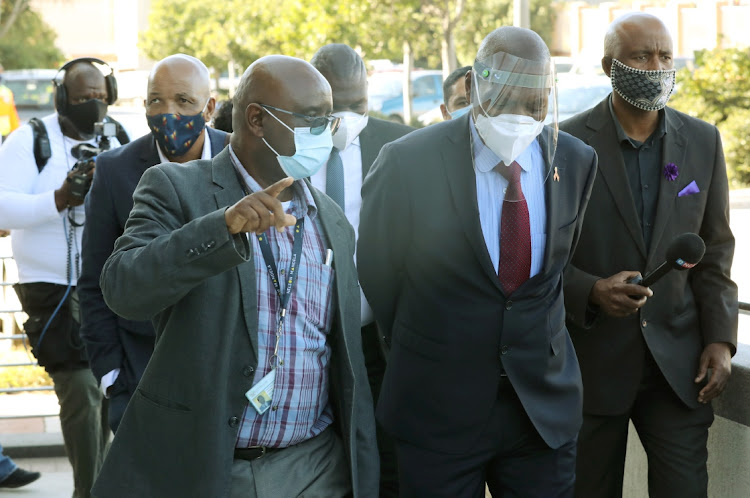 Though the question of whether the Eastern Cape health department should be placed under administration has come up in parliament, health minister Zweli Mkhize says he is “not yet there”.

Mkhize, who was in Port Elizabeth on Wednesday, said he would instead be sending reinforcements to bolster the province’s Covid-19 strategy.

Speaking at Livingstone Hospital during a two-day visit to Nelson Mandela Bay, Mkhize said questions of a takeover of the provincial health department had come up in parliament, but “you take over when you get to a point where there’s a whole breakdown of management, there’s reluctance to follow directions and instructions, there’s an internal inability for people to be co-operative.

“We’ve been through a number of instances in the country where this could be done, but I don’t believe we’re there,” he said.

Hijackers make off with Covid-19 tests in Port Elizabeth

“What we believe needed to be done was to reinforce the department and deal with specific things.

“I have the assurance from the premier [Oscar Mabuyane], [health] MEC [Sindiswa Gomba] and SDG [superintendent director-general Dr Thobile Mbengashe] and I’m quite fine with that.

“We’re still comfortable they can do it and theirs is to save the lives of the people of the province.”

The Eastern Cape department of health has come under fire in recent weeks, with both the DA and EFF saying Gomba needed to be replaced.

Over the past few weeks, horror stories about public health care in the province have played out in the media.

At Dora Nginza, expectant mothers were left waiting for up to 16 days for caesarean sections and  family members had to provide food as staff embarked on a go-slow.

Livingstone Hospital’s passages were strewn with rubbish, bloodied bedsheets were not washed and a report showed that screening protocols were not being adequately followed.

Clinics were regularly shut and staff claimed they did not receive the necessary personal protective equipment.

All community and mobile testing sites in the metro were closed.

Commenting on the testing strategy, Mkhize said it had shown that the province and metro had not run out of hospital beds but that people under investigation (those suspected of having Covid-19) had filled the beds.

This follows the previous delay in reporting the number of  deaths in Nelson Mandela Bay.

On Tuesday, it emerged that almost 100 people had died from Covid-19 in the city since the start of July — an average of close to five a day.

On July 2, the death toll from the coronavirus stood at 240 and it remained unchanged until Tuesday, when it emerged there had been a further 96 deaths in the metro since then due to Covid-19.

“MEC, your reporting of deaths must be as they come and on a daily basis,” Mkhize  told Gomba.

“We want to know what the figures are every day.

“We know there are challenges with death reporting because there are those whose comorbidities  were worsened by the virus, which resulted in their deaths.

“Others died around the period of Covid-19 and  all these must be investigated, but we are saying there’s a process of tracking deaths; we still want daily reports.

“We won’t allow you to delay by a day and then another day because it creates a distortion.”

The department had been watching the Eastern and Western Cape closely, he said.

“This intervention here is bigger because there are more issues needing to be dealt with here.

“The numbers and conditions here are the reason we sent a team.

“When numbers surged, we picked up a shortfall and this is the second time we’re sending a team here,” Mkhize said.

“We saw protests and we intend to deal with that,” he said.

Meanwhile, Zungu said she had visited a number of districts in the province since her appointment and had identified historical infrastructure issues.

She said there was also a shortage of ambulances in the province.

“We’ve drafted a provincial improvement plan and it has different components and time frames,” she said.

“What we’ve planned for is service delivery — we’ve looked at a model so that any patient that requires oxygen can access it in a period of two hours.

“We’ve looked at how far facilities are.

“We’ve picked up that our ambulances are short [insufficient] but we’re ensuring that there are equitable services and access,” she said.

'We will be over the worst by October/November': Prof Salim Abdool Karim on Covid-19 infections

The surge in Covid-19 infections could slow down around October.
News
1 year ago

The number of people infected with Covid-19 in Gauteng is 139,435 - of which 60,424 are in Johannesburg, the health department said on Wednesday.
News
1 year ago