Image: ANTONIO MUCHAVE Pallbearers arrive with the casket of Andrew Mlangeni during the official funeral held at UJ Soweto campus on July 29 2020.

“To the youth. I present to you a role model to emulate. He fought apartheid and studied at the same time. He never rushed to be a leader. He never fought for a position. He never left his community. It is never too late to emulate this leader,” Lesufi said at Mlangeni’s funeral at the University of Johannesburg’s Soweto campus.

He described Mlangeni as a “unique” comrade and a “true freedom fighter” whose contribution to the struggle was unmatched.

“In your honour we need to let go of the wrong things [including corruption]. Instead of fighting for peace and prosperity, our women and children are killed and attacked.”

Mlangeni, who turned 95 on June 6, died at 1 Military Hospital in Pretoria last Tuesday. He had complained of abdominal pain.

He has been hailed as a selfless man who stood against corruption and whose life was dedicated to the freedom of the country. 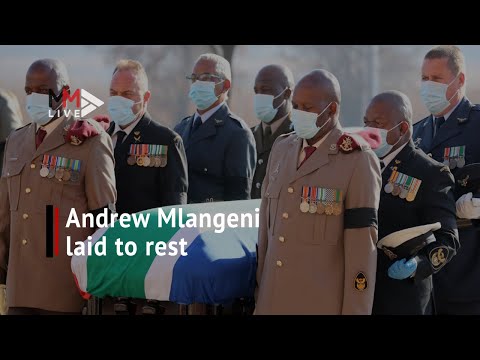