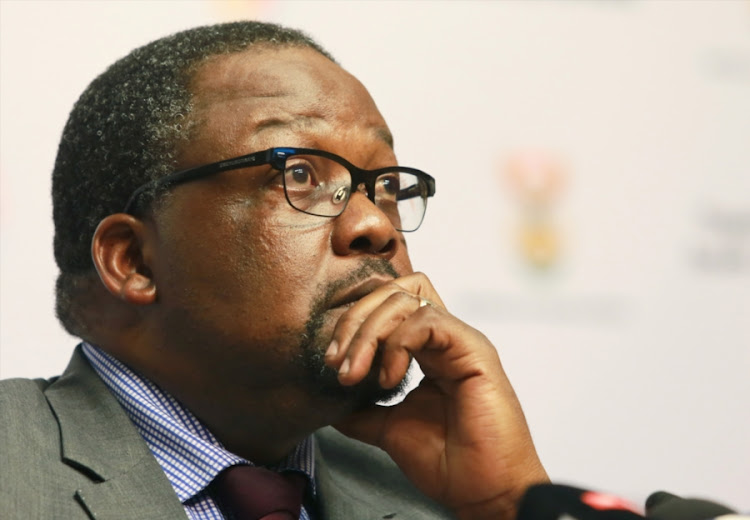 Nkosinathi Nhleko was full of jokes as he took the Zondo commission on a merry-go-round on Tuesday, stretching the scheduled half-day's testimony into a likely third day.
Image: Gallo Images / Nardus Engelbrecht

Barely a month after MPs expressed concern about the state capture commission’s runaway costs, with R700m already spent since its formation, it appears that belt-tightening is a long way away.

The apparent time-wasting started on Monday, with the new evidence leader, advocate Garth Hulley, having not done the proper numbering and pagination of documents before the hearing, thus forcing commission chair, deputy chief justice Raymond Zondo, to help him - in full view of the public.

As if this was not enough, Nhleko’s strategy, it would appear, was to get the commission engaged in futile merry-go-round without making much progress.

This he did by being hostile to Hulley, which led to Zondo having to step in. This was evident on Tuesday, when Zondo did most of the questioning because Nhleko simply rejected Hulley’s questions.

Even when this was the case, Nhleko still loaded his answers so that by the time he finished, it would be unclear what the question was that he was responding to.

Zondo noticed this and, more than once, got agitated. He told Nhleko - who had a history lesson to every question - that “it would help us make better progress if you just answer the question”.

That was not the end of it.

A dry sense of humour appeared to be another delay tactic employed by Nhleko whenever Zondo turned up the heat. On Tuesday, Nhleko controlled the commission’s flow and direction with his jokes and requests for a “comfort break”.

For starters, the tea break adjournment was taken earlier than normal after Nhleko requested that it be so, and Zondo agreed.

After lunch, it was jokes galore in the old Johannesburg city council chambers in Braamfontein from Nhleko.

He considered himself “blessed” for being handed water by commission spokesperson Reverend Mbuyiselo Stemela.

“I need some water,” announced Nhleko at one point.

Zondo emphasised: “There should always be water next to the witness.”

Zondo chuckled: “I hope you are not talking about the other water as we would say in isiZulu, Mr Nhleko.”

“I am very blessed that my water bottle has been sanitised by a reverend Stemela,” Nhleko continued, jokingly.

Nhleko replied: “He [Stemela] is the only one that offered me a cup of coffee at lunchtime.”

Zondo then responded, saying: “The commission is not so bad after all.”

Nhleko commented with a qualification that “some members of the commission” weren't so bad.

“And Mr Hulley, too, yesterday offered me a chicken and mayo sandwich,” he said.

The commission chair was, however, aware that Nhleko’s long-winded testimony must at some point be wrapped up and he gave it a “deadline” to be finished “within two hours” on Wednesday so that the commission “can look into other matters”.

This, too, did not happen as Nhleko only wrapped up his testimony on Wednesday at 3.30pm.

But by then, how much time - and money - could have been saved?

Brigadier Nyameko Xaba, who was scheduled to testify at the state capture inquiry on Tuesday, was excused after showing symptoms of coronavirus ...
Politics
1 year ago