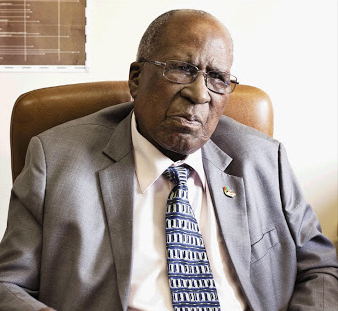 ANC President Cyril Ramaphosa has been called upon to spearhead the process of formalising the party’s integrity commission in honour of the late stalwart Andrew Mlangeni.

The call was made on Wednesday morning by family friend Malose Kekana as Mlangeni - who was the last surviving Rivonia trialist – was laid to rest in Soweto.

Kekana, who described Mlangeni as traditional and compassionate, was scathing on the ANC's refusal to arrest rampant corruption. He said Mlangeni took his work in the integrity commission very seriously and initially refused to speak publicly on the work it had done. Kekana said he changed his approach when it became obvious that the ANC was dismissive of the commission's work.

“Some of these people (who Mlangeni criticised publicly) did not take the integrity committee seriously and thus he became publicly critical. It was one of the most painful experiences for him but he was pushed to his decision by the inaction of the NEC on the recommendations of the integrity committee,” Kekana said.

Mlangeni was among stalwarts of the movement who went public with their grievances about former president Jacob Zuma, calling for him to resign towards the end of his presidential term.

“He was not widely recognised, there is not a street or building named after him and he would not have wanted that. If you want to recognise him, spearhead a policy change to make the integrity commission an independent constitutional structure that does not report to the NEC but to conference,” Kekana said, addressing Ramaphosa who is attending the funeral this morning and is set to deliver the eulogy.

Kekana pleaded with Ramaphosa to take action, saying if enough was not done to bring corruption to an end, “eventually the ANC will collapse”.

In recalling fond memories of Mlangeni, Kekana said the late stalwart was a man who held his customs very dear. He said every time he would drink whisky, whether at home in SA or in pubs in London, he would always take a moment to first spill some on the ground in tribute to his ancestors.

Anti-apartheid activist Andrew Mlangeni will be laid to rest on Wednesday.
Politics
2 years ago

A long guard of honour on Tuesday afternoon welcomed the body of the late struggle stalwart Andrew Mlangeni as he entered the gates of his Dube, ...
Politics
2 years ago