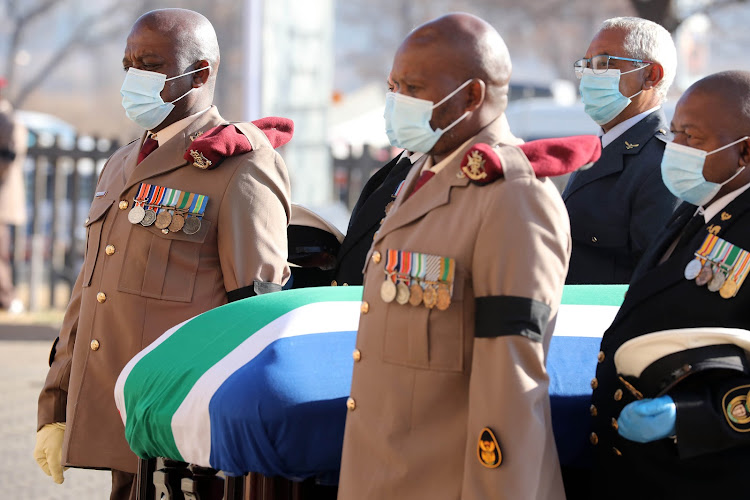 Former ANC president Thabo Mbeki has thrown his weight behind a consultative conference to address the ills of the ruling party in honour of the late stalwart Andrew Mlangeni.

Mbeki paid a virtual tribute as Mlangeni was laid to rest in Soweto on Wednesday.

The former statesman did not mince his words when calling for an urgent renewal of the party built by Mlangeni and others.

"Indeed, he had very good cause to be concerned. I am sure all of us will recall one of the important messages that came out of the 54th national conference of the ANC where it said, for instance, that there is a loss of confidence in the ANC because of social distance, corruption, nepotism, arrogance, elitism, factionalism, manipulating organisational principles, abusing state power and putting self-interest above the people.

ANC stalwart Andrew Mekete Mlangeni was laid to rest on 29 July 2020 at the Roodepoort cemetery in Johannesburg. The last remaining Rivonia trialist, who turned 95 on June 6, was admitted to 1 Military Hospital in Pretoria on 21 July 2020 with an abdominal complaint.

ANC President Cyril Ramaphosa has been called upon to spearhead the process of formalising the party’s Integrity Commission in honour of the late ...
Politics
2 years ago

"It said even strong ANC supporters agree that the sins of incumbency are deeply entrenched. I am saying as the ANC itself observed, it was natural that our leader comrade Mlangeni would be concerned about the ANC,” Mbeki said.

“We normally say, quite correctly, that when people like him pass their spirit lives on, that we emulate their legacy, that they should rest in peace. Laying to rest this particular distinguished patriot, this distinguished revolutionary Andrew Mlangeni – I think we must say those words with meaning and with conviction that, indeed, he should rest in peace, that we should emulate his example, that his spirit would live on.”

Mbeki’s comments came a week after President Cyril Ramaphosa instructed the Special Investigating Unit to look into all matters related to corruption linked to Covid-19.

The ANC in Gauteng is scheduled to announce on Wednesday decisions taking by its provincial executive committee (PEC) regarding some of its members in the province who have been accused of being embroiled in a scandal related to tenders.

Calls have been made for health MEC Bandile Masuku, Johannesburg MMC Loyiso Masuku and presidential spokesperson Khusela Diko, who also serves in the PEC, to resign from their positions in government.

Diko has opted to take a leave of absence in wake of the reports about her husband allegedly receiving a contract worth millions from the Gauteng government.

Mbeki said addressing the concerns of South Africans and party members would be the only fitting way to honour Mlangeni.

Mbeki backed a proposal made by stalwarts, some of whom have since died,  in the run-up to the ANC 2017 elective conference to have a consultative conference to take stock of the challenges faced by the party and map a way forward.

He said: “Calls have been made, for instance, for the ANC to constitute a consultative conference specifically to look at this matter of renewal. We need that so  it can discharge its responsibility to the people, the nation and the continent, and allow the old man Andrew Mlangeni to rest in peace.”

A long guard of honour on Tuesday afternoon welcomed the body of the late struggle stalwart Andrew Mlangeni as he entered the gates of his Dube, ...
Politics
2 years ago

Crocia Events, flagged in an investigation for potentially receiving "duplicate payments" for the funerals of three ANC stalwarts, has secured a ...
News
2 years ago