By zimasa matiwane and orrin singh 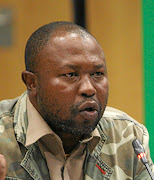 Thabiso Zulu, a close friend of slain ANC Youth League secretary-general Sindiso Magaqa who blew the whistle about alleged corruption in the Umzimkhulu local municipality, has been arrested.

TimesLIVE can reveal that Zulu was arrested on Wednesday night at his home.

Activist Vanessa Burger said the arrest was linked to protest action in Pietermaritzburg on Monday, and claimed the charges were politically related.

According to her, Zulu was granted bail but the charges against him – which she said appeared to be linked to “incitement to commit violence” – still stand.

“They then took him,” he said. “We are at the magistrate's court in Pietermaritzburg right now because we do not know why he was arrested - we are trying to find out.”

He said Zulu had been assaulted and pepper-sprayed during the arrest.

KwaZulu-Natal police spokesperson Capt Nqobile Gwala did not confirm or deny the arrest. “All the politically-related cases are investigated by the political task team,” she said.

Zulu had previously testified before the Moerane commission of inquiry into political killings in KZN. He blew the whistle on alleged corruption involving a municipal tender at Umzimkhulu that ballooned from R4m to R37m‚ which he claimed was behind Magaqa’s murder.

On Monday, protests broke out in Copesville, Pietermaritzburg. According to Burger, an independent community activist for human rights and social justice who has been outspoken about political killings in KZN,  Zulu's arrest is linked to this.

Burger believes that Zulu's arrest and subsequent charges have been trumped up and are politically motivated, and came as a result of him blowing the whistle on corruption before the Moerane commission.

"We demand the police immediately withdraw their bogus charges and instead arrest all officers involved in the detention and assault of Thabiso and fellow Copesville community members, and that the so-called police are charged with, among other crimes, defeating the ends of justice - then arrest their political handlers," said Burger.