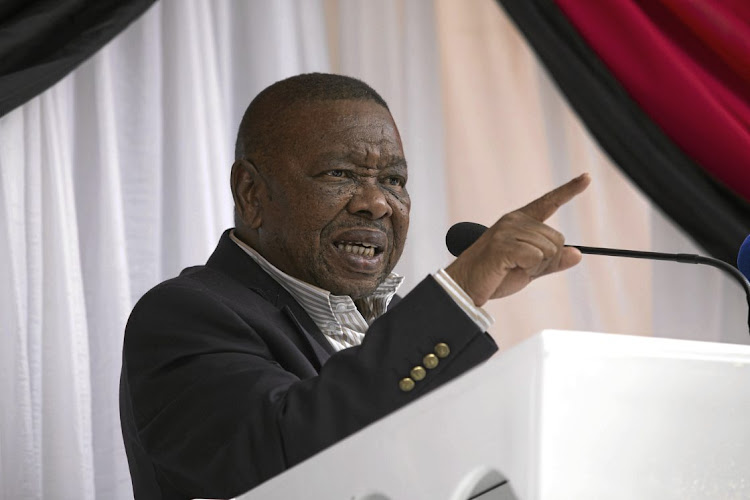 On Wednesday, Nzimande used the media briefing on the phased return of students to campuses to take a swipe at Holomisa.

This after Holomisa issued a statement, saying that he received a number of documents from an unknown source which expose Nzimande's alleged interference in a National Student Financial Aid Scheme (NSFAS) laptop tender.

“Minister Blade Nzimande and his lackeys seem to run their own higher education department, choosing Seta boards, stopping contracts, messing with NSFAS and sidestepping accounting officers. If all ministers operate this way, no wonder we have corruption everywhere,” said Holomisa.

Holomisa called on President Cyril Ramaphosa to investigate, saying it warranted an immediate intervention in terms of his stated goal of ridding the government of corruption.

“We call on you to suspend minister Nzimande and his lackeys with immediate effect, until your investigations are completed,” he said.

According to parliament's portfolio committee on higher education, science and technology, no laptops have been issued to qualifying NSFAS students because of “unnecessary delays in the finalisation of the procurement processes” by the scheme.

Deputy higher education and training minister Buti Manamela was bombarded with questions and complaints from staff and students on his visit to ...
Politics
1 year ago

Responding to Holomisa's allegations, Nzimande said, “all that he is saying is utter crap”.

“It is important for honourable Holomisa to be careful that he does not get used by corrupt elements to fight their fights,” said Nzimande. “Wittingly or unwittingly he is being used for that, he will be exposed. I can guarantee that. There’s absolutely nothing wrong that I have done with my department and I’m not interfering in my department. I’m running my department as tasked by the president.”

Nzimande challenged Holomisa to come clean on his own business interest in departmental matters.

“He has got business interests, we know that. He must not only go declare them in that form in parliament, he must come out publicly to say that I am raising corruption, but on my side here are my business interests so that we know that all these issues he is raising are because he is having other interests, other than public interest,” said Nzimande.

While Nzimande’s response sparked a conversation online, Holomisa stated that he had nothing to declare.

“I’ve got nothing to declare, but [Nzimande’s] interference and undermining of accounting officers must be addressed by the president as I have requested him to do,” he said.

Holomisa said Nzimande must answer to the allegations in the letter addressed to Ramaphosa, instead of “deflecting”.

“I agree with you, let's expose all the corruption in your department and entities and let the chips fall where they may,” he said.

Student union rejects 'two-tier' plan to save the academic year

The SA Union of Students has rejected higher education minister Blade Ndzimande’s plan to save the 2020 academic year, referring to it as a “two-tier ...
News
2 years ago

Here are five quotes from Blade Nzimande's address to Sactwu.
Politics
2 years ago