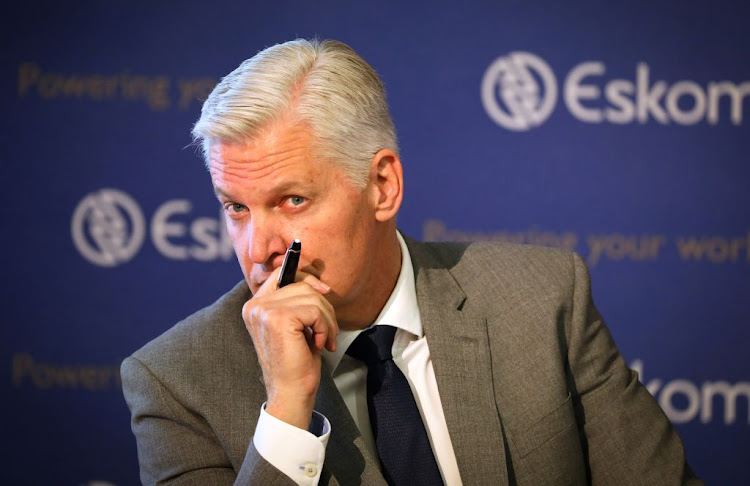 Eskom CEO Andre de Ruyter. The power utility is dragging its feet on meeting some of the conditions attached to it receiving R59bn from the government last year.
Image: REUTERS/Sumaya Hisham

Eskom has failed to meet some of the conditions attached to the R59bn it received from the government last year to service its debt through the special appropriation bill.

This has been disclosed to parliament by the National Treasury's chief director of state-owned enterprises oversight, Ravesh Rajlal, during a meeting with Eskom and the standing committee on appropriations.

Rajlal said the cash-strapped power utility has now postponed the deadline to dispose of the Eskom Finance Company (condition six) from the end of March this year to end of March 2021.

Finance minister Tito Mboweni imposed the disposal of the Eskom Finance Company as one of the condition attached to the R59bn, saying it was not core to the utility's operations.

“They were not able to dispose with that. They are now in a new bidding process and we understand that that target date is now moved to the end of March 2021,” he said.

Rajlal said Eskom had also not complied with condition 16, which was about the implementation of “remuneration standards”, with the delay being the awaited approval from the department of public enterprises.

He also reported “partial compliance” by Eskom on the conditions attached to cost containment and construction completion plans for the Medupi and Kusile power plants.

Eskom confirms stage 2 load-shedding from 8am on Wednesday

Eskom will implement stage 2 load-shedding on Wednesday.
News
1 year ago

Cold weather and power cuts. Hoorah. Not.
News
1 year ago

On August 22, the department of mineral resources and energy released a statement saying it has “issued the Request for Proposals for the Risk ...
Video & Podcasts
1 year ago