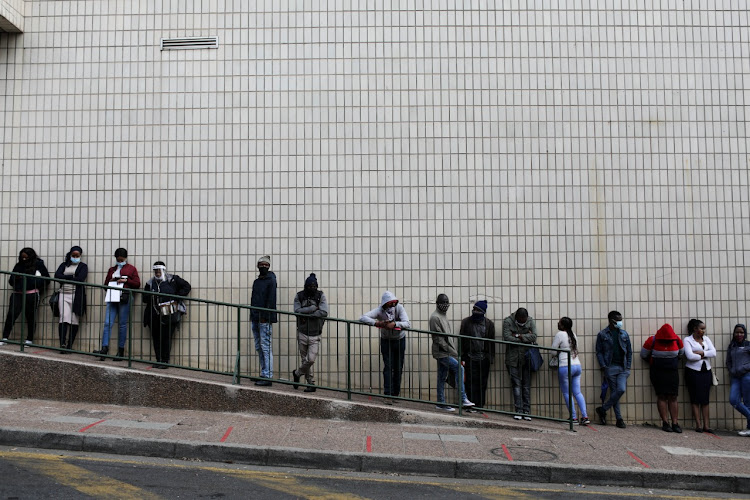 UIF applicants queue at the department of labour in Randburg to get financial relief during the Covid-19 pandemic. File image.
Image: Alaister Russell/The Sunday Times

Social development minister Lindiwe Zulu has told parliament that some government employees may have applied for the special Covid-19 social relief of distress grant meant for the poor and unemployed.

Zulu revealed this while issuing a warning that the government was coming for its employees who benefited from the scheme, announced by President Cyril Ramaphosa to bring relief to the poor whose poverty was amplified by the lockdown.

“The message to those people is that we will do everything to make sure that we get that money back,” she said on Wednesday.

“I was the minister who went in public and said it is very annoying, actually, to find that there are people who are working for government, who know that they are receiving something, who are applying for the R350 grant, and they shouldn't have applied for the R350,” she said.

“When you look at the 8 million applications and 5 million people that have been approved and have been paid, you can see that there is a very small margin of people that were able to penetrate into the system and get the R350.”

Queues for the R350 special Covid-19 relief grant become unmanageable at times as people forget social distancing in their scramble to advance in the ...
News
1 year ago

Zulu was answering MPs' questions in the National Assembly.

Earlier in the day, auditor-general Kimi Makwetu published findings following his office's Covid-19 relief funds audit. He found that there was a risk of millions of the R350 grant being erroneously paid to people who are not in distress due to outdated database systems.

Van der Merwe asked the minister whether she would be asking Memela to step down, given these massive failures.

“I have, at this moment, no intention whatsoever of asking the CEO to step aside,” responded Zulu.

She reminded MPs that during the early stages of lockdown they were being attacked for delaying payments. She said the delay was because they were putting systems to avoid some of the things raised by the AG.

When FF Plus MP Tamarin Breedt suggested that if Zulu won't dismiss Memela, maybe she should step down herself because someone needed to be held accountable for the failures.

“My fear, however, is that in the [AG's] opinion there were a lot of system failures. Systems are run by people and people are not perfect.

Ruben Mukhakwedzwa from Nzhelele in Limpopo spends R50 to travel to and from Louis Trichardt to collect his R350 Covid-19 grant. His local post ...
News
1 year ago

She asked the minister if thorough investigations would be done and whether officials would be held accountable and face consequences for failing the poor and the vulnerable.

“If not the CEO of Sassa, then it has to be you,” added Breedt.

While she agreed with Breedt that systems were run by people and that people who have done wrong should be held accountable, Zulu was adamant that she hadn't done anything wrong.

“One of the things that I know is that this Lindiwe Zulu hasn't done anything wrong in that space. This Lindiwe Zulu doesn't sleep … like all the other ministers, we don't sleep. We work day in and day out. We sit endlessly in meetings because we are committed in one thing and one thing only: serving the people of South Africa,” she said.

Sassa has previously confirmed that its systems have rejected qualifying applicants due to database errors. But on reconsideration, some would be approved and ultimately received their payment.

KZN woman in court for allegedly defrauding Sassa of R7m

Asanda Mthelekiso walked to his neighbour's home in Cape Town on Wednesday and handed a lunch box to Linda Mbewu, who filled it with a hot meal. ...
News
1 year ago

This is one of the examples of a flawed government system in which legitimate applicants are told they don't qualify for the R350 Covid-19 social ...
News
1 year ago