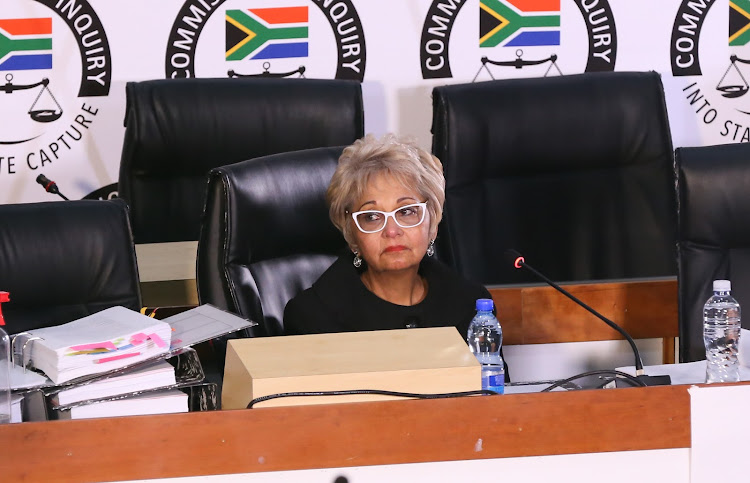 Venete Klein blamed Zola Tsotsi for shambolic decisions taken by the Eskom board in 2015 that brought the power utility to its knees.
Image: Gallo Images/Luba Lesolle

Former Eskom board member Venete Klein has implied that the cash-strapped power utility paying R18m to three executives - sent packing having done nothing wrong - was not a big deal.

Klein was giving evidence at the state capture commission on Thursday. Her evidence was centred on the controversial parting of ways between Eskom and three top executives in 2015.

The trio were suspended in March 2015 after then Eskom board chairman Zola Tsotsi moved this motion at a board meeting.

Tsotsi testified earlier this week that the idea had emanated from former SAA chairperson Dudu Myeni during a meeting at the Durban state house of then President Jacob Zuma.

The state capture inquiry on Tuesday heard how controversial former SAA board chair Dudu Myeni knew intimate details about the inner workings of ...
Politics
1 year ago

Myeni, in the presence of Zuma, had told him to inform the Eskom board that an inquiry should be held to improve the performance of the power utility and that executives had to step aside to allow that probe to run smoothly.

Tsotsi complied and sold the idea to the Eskom board which agreed and suspended the trio, as well as then head of commercial and technology Matshela Koko.

A battle ensued as the executives felt hard done by the board for being suspended without committing any misconduct nor wrongdoing. Three of them took exit settlements while Koko opted to remain at Eskom.

Matona, Molefe and Morakane were paid a combined sum of R18.2m to leave Eskom - financially strained as the power utility was at the time.

Klein, asked on Thursday why the board opted for exit settlements instead of just reinstating the executives, said R18.2m was not a big deal - much to the surprise of commission chairperson deputy chief justice Raymond Zondo.

"A company [Eskom] with a turnover of R375m per annum and R30m daily operational costs, I do not know how we conclude that R18m is comparative," said Klein.

"We were on a burning platform, we were sitting with no money and there was pandemonium."

Klein put the blame on Tsotsi for having been the person who sponsored the motion for the suspension of the executives.

This despite Tsotsi having tried to extract himself from the mess in his testimony, putting the blame on then minister of public enterprises Lynne Brown.

Klein insisted that she did not remember Brown forcing the idea of the inquiry and the suspension of the four executives to the board.

As far as she was concerned, Tsotsi lobbied the board to throw its weight behind the idea, and did so successfully.

"The board had deliberated long and hard. I was convinced by the chair [Tsotsi], he told us as the board that the presence of the executives could hamper the inquiry," said Klein.

"I absolutely supported the inquiry. The chairperson Mr Tsotsi gave us reasons why he believed the suspensions should happen."

Asked what her personal opinion was on the matter and if she put it across at the meeting that took the resolutions, Klein said: "When a board has made a decision, then you go out and execute on what the board had agreed. I had agreed that I support the suspensions."

The suspension of the four executives saw Eskom getting an investment rating downgrade.

Klein added that with hindsight, she acknowledged that "some of the decisions we made could have been better made".

Eskom's former board chairman Zola Tsotsi on Wednesday told the state capture commission that his dramatic resignation in 2015 was premeditated by ...
Politics
1 year ago