The state capture inquiry heard on Tuesday that senior management at Eskom allegedly had links to the corruption-accused Gupta family, and that businessman Salim Essa, also linked to the family, allegedly influenced some of the decisions taken at the power utility.

These allegations were made by Eskom's former company secretary, Suzanne Daniels, during her testimony at the inquiry.

Here are five allegations Daniels made:

“I met Mr Essa for the first time in March 2015. I was called to Melrose Arch by Matshela Koko [ex-Eskom acting CEO]. We went across the road to an office building. I had to hand in my phone at reception. Then this gentleman walks in and introduces himself as Salim Essa and says he is the adviser to [former public enterprises] minister [Lynne] Brown.

"He asked me what we need to do if we want to suspend people. He proceeded to tell me that in the coming days, the four executives Tshediso Matona [former Eskom CEO], Dan Marokane [former Eskom CCO], Tsholofelo Molefe [former Eskom finance director] and Matshela Koko would be suspended from Eskom.”

“There was a meeting where minister Lynne Brown was called. Board members were complaining that their bank accounts were being investigated and that they were declared politically exposed persons.

"The next day, one of the board members called and said she was angry because Nedbank was threatening to freeze her accounts. She said to me, 'if these people think I'm going down alone, they have another think coming. Everybody knows this board is a Gupta board'.”

Meeting Duduzane Zuma and the Guptas

“Salim called and asked to meet for coffee. We met at a hotel in Melrose Arch and he took me to what I thought were offices but were in fact townhouses. In the room were Ajay Gupta, Duduzane Zuma, [former public enterprises deputy] minister Ben Martins and an Asian lady whose name I cannot remember.

"[Asked] about the Brian Molefe case, I said in terms of process, we were going to see the deputy judge and we would discuss case management. Gupta said: 'We are going to need someone from the deputy judge's office to move this case out.' He also said this matter would be easier to deal with when Nkosazana Dlamini-Zuma comes into power.”

“I did not participate in the Saxonwold visits. I was not offered bags of cash. [The R800 million bribe offered by Essa] was in late 2017 and an act of desperation as their bank accounts were being frozen, but I did not accept it. The reason for the bribe was to get Matshela Koko to be CEO of Eskom. That's what Essa said at the time. He said, 'I promised Matshela  he would be CEO'."

“In the beginning, I didn't quite believe three brothers would control the state in the manner they did. That is why I started speaking to the media, first anonymously because there was such an element of mistrust at work. I did speak to my colleagues, but because of that atmosphere, you did not know who was loyal to who.” 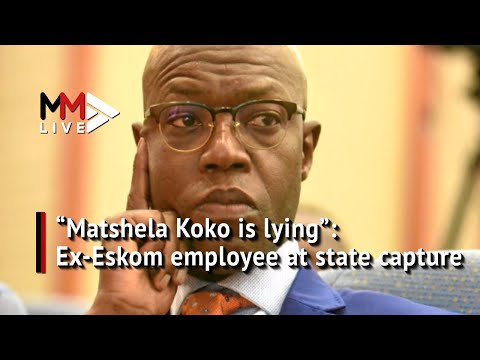