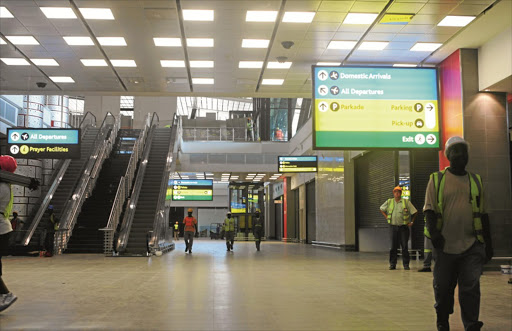 While borders and other points of entry will reopen under level one, government has decided to retain the ban on travellers from the US, UK, Spain and Italy – which are key markets for the revival of the tourism sector.
Image: THEMBINKOSI DWAYISA

President Cyril Ramaphosa will tell the nation on Wednesday night that he is moving the country to Level 1 of the national lockdown and opening up international travel — with provisos.

Travel from high-risk countries such as the US and some of the major EU countries will remain banned.

Controversially, however, arrivals from India and Brazil — which have the second- and third-highest infection rates in the world — will be permitted.

People arriving from countries permitted into SA will have to produce a negative test result taken 72 hours before travel, which will grant them access without having to quarantine first.

According to top insiders who attended meetings of the Presidential Coordinating Council on Tuesday, the cabinet — which is meeting on Wednesday — is expected to endorse the decision to move to Level 1 of the lockdown and the resumption of international travel. The president would then address the nation afterwards.

Travellers who display symptoms will have to quarantine at own cost, even if they produce evidence of having tested negative 72 hours prior

Acting presidential spokesperson Tyrone Seale could not immediately confirm this when contacted on Wednesday morning. “We do normally make announcements before the president addresses the nation,” he said.

A member of the National Coronavirus Command Council said the decision to move the country to Level 1 and allow international travel, was supported by health minister Zweli Mkhize, who cited declining daily infection rates and the availability of beds at trauma units and quarantine facilities as evidence that SA was ready to open up.

A senior government official privy to discussions said the decision to open up was premised on a risk-based approach.

“We have a very low number of hospital admissions, very low numbers in critical wards. Our equipment such as ventilators are in abundance and quarantine sites are lying empty at the moment. We are seeing low admissions and low infection rates on a daily basis. Less than 1,000 people per day are contracting the virus.

“Should there be an case upsurge at Level 1, based on empirical evidence around the world a second upsurge is never as big as the first one. We have enough equipment and facilities to handle it.”

An NCC insider said while borders and other points of entry would reopen, the government had decided that travellers from high-risk countries would not be permitted to enter SA. These include the US, the UK, Spain and Italy — which are key markets for the revival of the tourism sector. But arrivals from India and Brazil, with 4.3m and 5m infections, respectively, will be allowed. “India and Brazil do not present high numbers for us.”

Travellers who display symptoms will have to quarantine at own cost, even if they produce evidence of having tested negative 72 hours before they travelled.

A small contingent of artists, musicians and creatives protested at the Union buildings in Pretoria on September 16 2020. The protesting artists say that government has not done enough to support an embattled industry during the coronavirus pandemic.

Cyril Ramaphosa and Zweli Mkhize's hints on level 1 lockdown, plus what could change

South Africa's economy will likely contract this year by more than the 7% previously forecast by the Treasury, Finance Minister Tito Mboweni said in ...
Business Times
1 year ago

About 12 million South Africans could have contracted Covid-19, many not even knowing it

Modelling predicts that there are probably about 12 million South Africans - detected and undetected - infected with the coronavirus, translating to ...
News
1 year ago