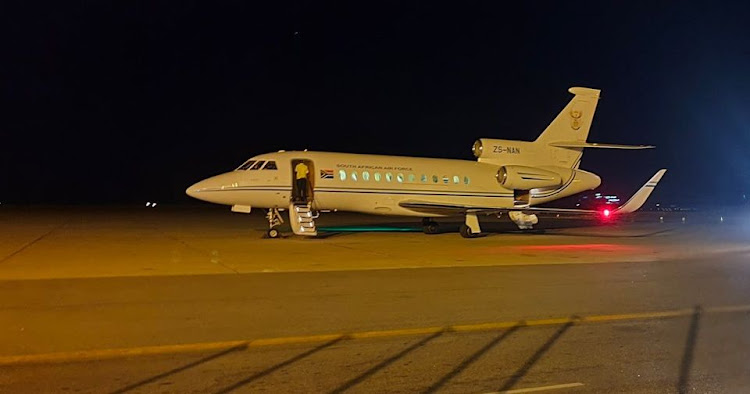 The SA Air Force jet ZS-NAN is reserved for use by VIPs.
Image: Facebook/DA Gauteng

The DA says it will submit a Promotion of Access to Information Act (PAIA) application to force President Cyril Ramaphosa to release a report on the circumstances leading to defence minister Nosiviwe Mapisa-Nqakula sharing a flight to Zimbabwe with an ANC delegation.

DA shadow defence minister Kobus Marais said the report was gathering dust on Ramaphosa’s desk and “must be made public”.

“We cannot allow a situation where a report, potentially detailing a flagrant abuse of scarce state resources, is viewed and decided upon by President Ramaphosa alone, whose track record in holding his ANC comrades accountable for corruption is depressing,” said Marais.

Ramaphosa directed Mapisa-Nqakula 10 days ago to furnish him, within 48 hours, with a detailed report on the flight.

He has been tight-lipped on the matter since then.

Parliament 'must have oversight' on ANC payback for Zimbabwe trip: DA

The DA wants parliament to be part of determining how much the ANC will pay for senior party members who used an air force jet to travel to Zimbabwe.
Politics
1 year ago

The DA previously asked Ramaphosa to immediately release the report on the ANC delegation using an air force jet to visit their counterparts in Zimbabwe.

Marais said this has not happened.

“It is unacceptable that the minister reports back to the ANC about the ANC’s failures and South Africans are left in the dark,” said Marais. He said it had become common in the ANC to play both judge and jury in “an unashamed attempt to escape accountability”.

“The ANC cannot legitimately investigate itself, the president must hand over this report so that checks and balances that are available in our democratic system can properly scrutinise it and hold those found guilty accountable,” said Marais.

The ANC caucus revealed on Sunday that on Friday Mapisa-Nqakula briefed the party's study group on defence about her working visit to Zimbabwe and on the management of Covid-19 funds within her department.

The study group on defence is made up of ANC MPs who sit in the parliamentary committees to which the department of defence accounts.

The ANC study group said it supports the decision taken by the component of ANC national executive committee (NEC) members to reimburse the state for the costs of their travel to Zimbabwe.

Mapisa-Nqakula report on ANC flight must be made public: DA

The DA has demanded that the president make public a report on an alleged breach of lockdown regulations and apparent abuse of a state aircraft by an ...
Politics
1 year ago

ANC MP Thabo Mmutle, who is the whip of the ANC in the defence portfolio committee, said the trip was “to conduct important work in support of human rights”.

“We wish to abide by the democratic centralism of our beloved movement,” he said.

The ANC dismissed a call by the DA that extra costs should carried by the ANC, arguing that the jet was on its way to Zimbabwe, whether the ANC delegation was on board or not.

Mapisa-Nqakula indicated at the briefing that the trip to Zimbabwe was now the subject of investigation by the public protector, said Mmutle.

He said the study group resolved that the chairperson of the defence portfolio committee should convene a meeting so that the minister could brief the committee.

'We were wrong': Ace Magashule says ANC will pay for air force jaunt to Zim

The ANC has undertaken to reimburse government for the costs incurred during its controversial use of an air force jet on a party-political mission ...
Politics
1 year ago

Zimbabwe’s ruling Zanu-PF says the ANC special envoy to Harare is acting in bad faith and “forcing” it to meet opposition and civil society groups.
News
1 year ago

'It is not enough to reimburse': SA responds to ANC ‘humbling’ itself after Zim flight