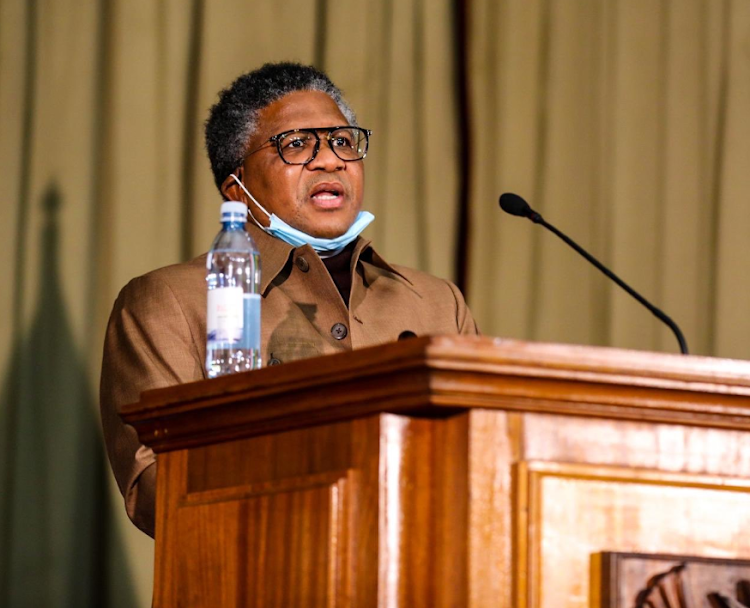 Transport minister Fikile Mbalula said Winnie Madikizela-Mandela fought patriarchy and injustice and was driven by a dream of freedom, not only for herself but her people.
Image: Twitter/Fikile Mbalula

Transport minister and former ANC Youth League president Fikile Mbalula used his address at the annual Winnie Madikizela-Mandela lecture on Wednesday to call on the ANC to disassociate itself from those who are corrupt and don't respect the rule of law.

The lecture came days after South Africans celebrated Ma Winnie's contributions to the struggle against apartheid on what would have been her 84th birthday.

Here are six quotes from the lecture:

“The only way to honour the legacy of Mama Winnie is for us to be bold and unapologetic in transforming the economy and delivering a better life for all. If we fail at this task, we will have failed Mama Winnie.”

“It has not been a rosy path; it has been a path with different challenges, which brought us to where we got political control. If it is not guided with theory and ideology, this political power will go. This means the ANC will dissipate and so will the hopes of our people.

“We do have fly-by-nights which claim to have the same ethos as the ANC, but it's not the same.”

The ANC must not lose its identity

A voice for the voiceless

“Mama Winnie came to be the voice of the poor, the oppressed and the voiceless. She became the conscience of the nation and the custodian of the needs and aspirations of the poor. She earned the title of the mother of the nation.

“At the height of the apartheid repression, she opened her home to the people of Soweto and this continued until the day she passed on. Ordinary people found comfort in her warmth and love.”

Ma Winnie was a fighter

“She was terrorised and offended by the apartheid regime. She was banished in the Free State, the enemy did not give her the space to breathe. She never had an ordinary life with her family and the life of raising your own daughters.

“Her unbreakable spirit, resilience and sheer determination to succeed left a legacy that must fuel our resolve to make the promise of a better life for all a lived reality.”

She was a gender activist

“We are all equal and therefore we must undo patriarchy in out society ... The women of the future must be independent, not subjected to domination.

“She fought against patriarchy ... this defined who Winnie Madikizela-Mandela was. She never allowed herself to be socially and economically submissive. She was driven by a dream of freedom, not only for herself but her people.”