Did Ramaphosa break lockdown rules by going maskless? Nah, the pic is old 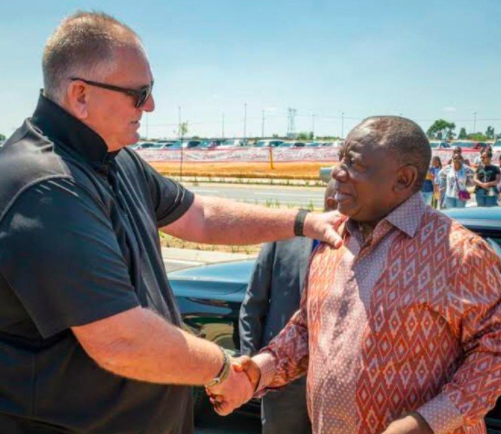 This photo was taken in March, before the lockdown, when Balwin Property launched the R9bn Munyaka Lifestyle Estate in Midrand.
Image: Screenshot/Julius Malema

An old photograph of President Cyril Ramaphosa shaking hands with Balwin Property CEO Steve Brookes has been causing a buzz on social media, leaving many to believe he broke his own Covid-19 regulations.

The photo was circulated on Twitter over the weekend by several accounts, including EFF leader Julius Malema.

It follows Ramaphosa and Brookes attending the launch of the Mooikloof Megacity Development project in Pretoria, where the president said the project would help accommodate black people who are still “confined to townships” as a result of apartheid spatial planning.

The powerful, you are patted down by fools you were supposed to be leading @CyrilRamaphosa. Sies, o tšhaba makgowa... pic.twitter.com/AHa9TuaY8X

I don't like this at all!!!🤔🤣
- How can Cyril Ramaphosa let this happen🙄 pic.twitter.com/8Nnk2XjleQ

Did Ramaphosa break the law?

The photo shared by Malema and many others was taken in March, pre-lockdown, when Balwin Property launched the R9bn Munyaka Lifestyle Estate in Midrand.

According to a BusinessLIVE report, Ramaphosa attended that launch as a guest speaker.

He praised Balwin for undertaking a large-scale development, despite SA’s testing economic conditions.

“I’m a great believer in the development of infrastructure in our country, and Steve has just proved to me it can be done, even in the very trying economic conditions we are going through,” he said at the launch.

When Ramaphosa met with Brookes over the weekend, both men were wearing different clothes. In a photo shared to debunk the claims, Ramaphosa and Brookes can both be seen wearing face masks and not shaking hands.

Fake News are real: Yesterday’s picture of President Ramaphosa on frame 1 not 2 pic.twitter.com/WbGkSqJPvX

In a video shared by the Presidency's official Twitter account, Ramaphosa can be seen greeting Brookes with his elbow.

“Thank you Mr President for honouring us once again. Unbelievable, thank you,” Brookes can be heard saying to Ramaphosa.

Warning: Con artists, cybercriminals and fraudsters preying on the fear and anxiety of South Africans

Con artists, cybercriminals and fraudsters are preying on the fear and anxiety of South Africans and whenever there's a crisis, they will try to ...
News
1 year ago