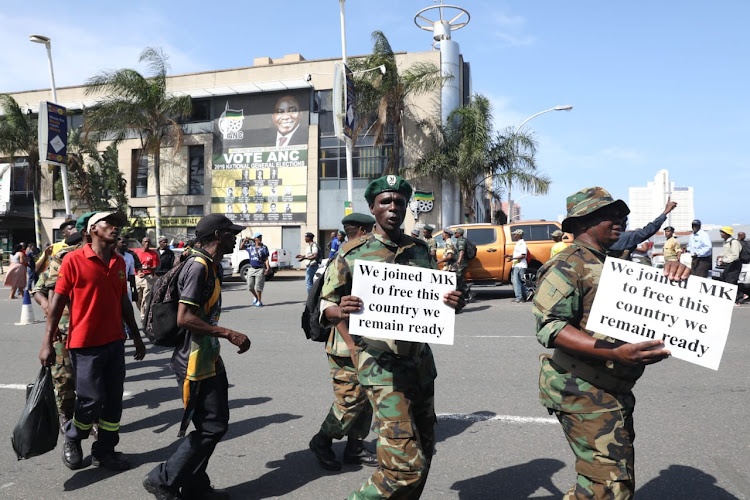 ANC secretary-general Ace Magashule and Umkhonto we Sizwe Military Veterans Association (MKMVA) president Kebby Maphatsoe were on Tuesday afternoon locked in  the KwaZulu-Natal ANC office to deal with a power struggle within the province.

The heavy-hitters are trying to resolve the contentious issue of the legality of the MKMVA structure in the province. The power struggle within the association in KwaZulu-Natal is over the provincial leadership's tenure. While its term has officially expired, the organisation couldn't go to conference due to the national ANC directive calling off all conferences during the coronavirus pandemic.

The ANC, however, has rejected calls to interfere or attempt to disband the expired MKMVA provincial leadership.

“The SG [Magashule] and MKMVA president [Maphatsoe] are here with the provincial secretary. They are meeting with a delegation representing MK soldiers, who call themselves 'MK freedom fighters',” said ANC KwaZulu-Natal spokesperson Nhlakanipho Ntombela.

“They are raising their issues with the SG. The key thing they are demanding is that we [ANC KZN] disband the MK provincial structure. That has been a bone of contention in our engagement because it is not our competency.”

Umkhonto we Sizwe Military Veterans Association spokesperson Carl Niehaus has slammed Fikile Mbalula for labelling some of the association's members ...
Politics
1 year ago

The same grouping embarked on a protest in September in an attempt to shut down Durban and delivered a memorandum of demands to the ANC provincial office.

While the meeting went on inside on Tuesday, men clad in military regalia, and brandishing placards declaring “we joined MK to free this country we remain ready”, sang struggle songs outside.

They were expecting Magashule, Maphatsoe and ANC provincial secretary Mdumiseni Ntuli to address them after the meeting.

The memorandum handed to the ANC during the “Durban shutdown” march two weeks ago included demands to ban foreigners from employment in transport, hospitality, education, medical sectors and strategic SOE positions, including employment as domestic and farm workers.

The list of demands ended with a call for “decent and meaningful employment and opportunities for former MK and other liberation war veterans”.

Ntombela said the delegation inside the meeting included “truck drivers, hawkers and unemployed graduates” who were present to express their requests.

The Gauteng Umkhonto we Sizwe Military Veterans Association (MKMVA) march on Monday hit a snag as they withdrew their memorandum due to the ...
News
1 year ago