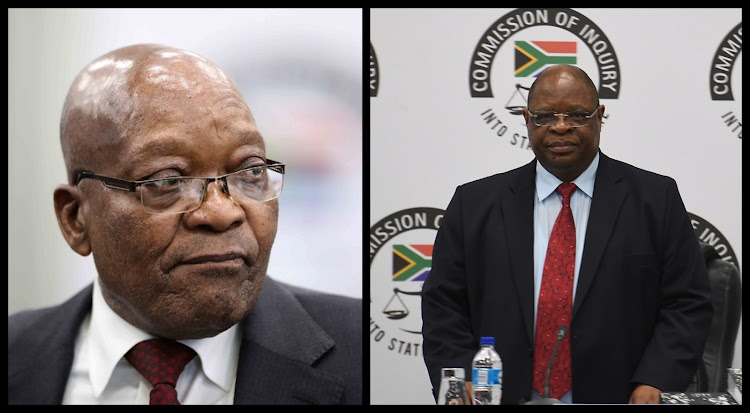 South Africans have been left with more questions than answers regarding the “beef” between deputy chief justice Raymond Zondo and former president Jacob Zuma.

Zondo on Thursday released a statement in which he revealed that he fathered a child with a sister of one of Zuma's wives, Thobeka Madiba, in the 1990s. He said to his knowledge, Madiba had not been in a relationship with the former president at the time.

Many have questioned the relevance of this information to the work of the inquiry and whether it is a conflict of interest. Others have questioned whether Zondo should have made this private matter public.

Before revealing the “historical personal family ties”, the deputy chief justice had been accused of bias against the former president, who has even gone as far as demanding that Zondo recuse himself as the chair of the inquiry.

Deputy chief justice Raymond Zondo had a child with a sister of one of former president Jacob Zuma's wives more than 25 years ago.
Politics
1 year ago

In September, Zuma, through his lawyer Eric Mabuza, accused Zondo of wanting to subject him to public humiliation and paint him as a “liar” and “guilty at all costs”.

Mabuza said Zondo's “bias” against Zuma was a result of the two having “historical personal, family and professional relations that ought to have been publicly disclosed by the chairperson before accepting his appointment”.

Mabuza did not provide further details at the time.

“By law, you only have to recuse yourself if there is a reasonable fear you will be biased. The link is far removed. No judge in SA is ever going recuse himself because of this type of fact. I was surprised his lawyers raised it. It’s quite silly. I was actually amused,” said constitutional law expert Pierre de Vos.

Lawson Naidoo, executive secretary at the Council for the Advancement of the SA Constitution said Zuma should have disclosed the “family ties” when he appointed Zondo to the office of the deputy chief justice.

‘Quite silly … deranged’: the experts’ verdict on Zuma’s beef with Zondo

The claim of bias, based on the fact Zondo had a child with the sister of Zuma's future wife, 'doesn't hold water'
News
1 year ago

In his statement, Zondo said the “family ties” have never influenced his past and present duties as deputy chief justice.

Here are some of the views from social media:

Judge Zondo having a child with former President Jacob Zuma s wife s Sister is a non issue,fact Zuma must answer on accusations made when he was President that he enabled the Guptas to capture the state.

Where was this love child when #JacobZuma appointed Raymond Mnyamezeli Zondo as Deputy Chief Justice? pic.twitter.com/3tLklhRuyq

Jacob Zuma is not related to Deputy Chief Justice Raymond Zondo. The end.

When Jacob Zuma appointed Raymond Zondo to be the Deputy Chief Justice he didn't have a conflict of interest then? He also didn't raise an objection with CJ Mogoeng when CJ proposed that Zondo head the SS commission. Reason: he thought Zondo was gonna break the rules to help him.

I'm not sure that the fact that Jacob Zuma and DCJ Raymond Zondo's are brothers in law adjacent, presents a conflict of interest

The son of former president Jacob Zuma still feels betrayed by Deputy President David Mabuza, who he alleges has been giving him the cold shoulder ...
News
1 year ago

Former president Jacob Zuma’s son Duduzane on Thursday said he was forced to move to Dubai because it became impossible to do business in SA.
News
1 year ago