Ace Magashule supporters have come out in numbers at the magistrate's court in Bloemfontein.
Image: Thapelo Morebudi/Sunday Times

About 1,000 ANC members, some of them waving ANC flags, converged metres away from the cordoned off Bloemfontein magistrate's court precinct on Friday morning ahead of ANC secretary-general Ace Magashule's appearance on corruption charges.

They sang "Ramaphosa must answer as to what Ace has done".

One group carried a placard which read "This case is politically motivated", while another carried one reading "Hands off Ace Magashule".

Among the prominent ANC members who waited outside the court precinct for Magashule's appearance were MP Simon Bongo and uMkhonto we Sizwe Military Veterans Association spokesperson Carl Niehaus.

"I am here because the secretary-general of the ANC is in court. We are not here to speak about the merits of this case," Dlamini said. 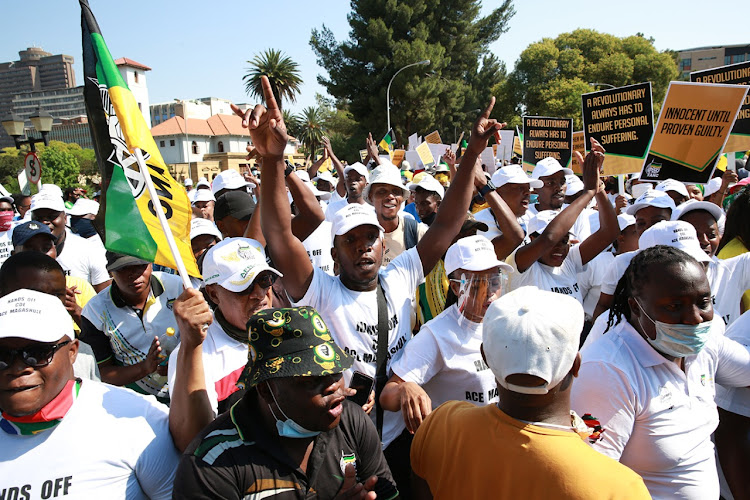 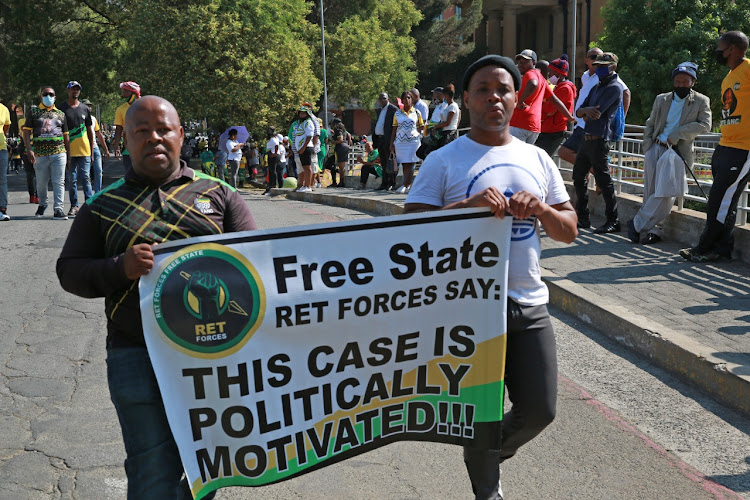 He asserted there was a trend within the ruling party in which certain leaders are targeted and castigated.

Police maintained a heavy presence as the size of the crowd increased.

Magashule had presented himself to the Hawks offices, not far from the court ahead of his appearance.

He said the leadership can answer questions about what this means for the future of the ANC.

Sighted elsewhere in the city on Friday was a truck driver observing Covid-19 protocols with unusual headgear.

Trucker Johannes Mokolo outshines ANC supporters for fashion style in Mangaung on Friday, where crowds have gathered in support of ANC secretary-general Ace Magashule. Mokolo was not part of the crowds.
Image: Kgothatso Madisa/TimesLIVE

Johannes Mokolo, who had arrived from Upington, in the Northern Cape, on Thursday night, said he was using his time off to do some shopping.

He bought the gear in Bloemfontein when lockdown was announced, and said it's with him wherever he goes.

“I bought the mask along with the traditional shoes - It's a set. It’s how I’m protecting myself from corona [virus]. I like it because I can breathe easily. I’ve had this since corona started.”

Many of Magashule's supporters were wearing party regalia, contravening the ANC's call not to wear official party colours and to instead support Magashule in their individual capacities.

Speaking during Thursday's night vigil in support of Magashule, Niehaus said the members bought the clothing with their own money and would wear it as they pleased.

“As ANC members, we buy these T-shirts with our money. We can wear them, and we will wear them,” Niehaus said.

Ace Magashule hands himself over to Hawks, as allies gather

ANC secretary-general Ace Magashule has handed himself over to the Hawks at their offices in Mangaung, Bloemfontein.
Politics
3 months ago

Several senior ANC leaders found themselves in the middle of a brawl between the police and Ace Magashule’s supporters outside the Bloemfontein ...
Politics
3 months ago

Ace Magashule is expected to appear at the Bloemfontein high court on Friday.
Politics
3 months ago