Magashule digs in heels, won't step aside and thanks all who paid his bail 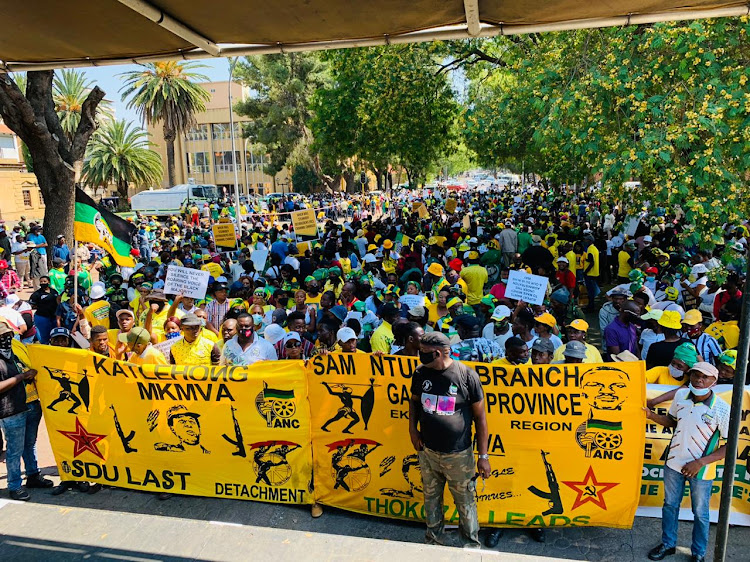 'I want to thank the comrades who contributed to paying my bail,' ANC secretary-general Ace Magashule told supporters outside the magistrate's court in Bloemfontein.
Image: Kgothatso Madisa

Only a special ANC conference can tell him to step aside, party secretary-general Ace Magashule told thousands of supporters outside the Bloemfontein magistrate’s court on Friday.

Magashule was speaking after being granted R200,000 bail in the corruption case in which he faces 21 charges related to a R255m Free State asbestos roof tender.

He told the crowd that only the branches that elected him could ask him to step aside as the case proceeded.

“I’ve grown up in traditions and cultures of the ANC. I’ve never seen one individual in the ANC deciding for us. It will never happen while we are there,” he said.

This was in response to a letter by President Cyril Ramaphosa in which he reiterated the call for those who faced criminal charges in court to step aside until their names were cleared.

The matter is seemingly a hot potato in the party, which has several senior leaders embroiled in legal battles.

ANC secretary-general Ace Magashule was released on bail of R200,000 after he made his first appearance in a packed Bloemfontein magistrate's court on November 13 2020 to face charges of fraud, corruption and money laundering. Hundreds of supporters gathered outside the court in support of Magashule.

The state has secured an ace in its case against ANC secretary-general Ace Magashule after his former personal assistant was revealed to have turned ...
Politics
1 year ago

“The ANC is an organisation of branches. That is why I will respect the voices of branches,” said Magashule.

“I was elected by branches of the ANC. We must go to a special conference and the branches must say to me, 'comrade Magashule, step aside.'

“I will then do so because it will be coming from the basic units of the ANC, the branches that voted for us at conference. Nobody can remove us,” Magashule told the roaring crowd.

He said those who made allegations against him must repeat them in the witness stand.

“It is good that I was charged today because those who have been making allegations, we want them inside the [witness] box.”

Magashule told the crowd that those who made a “lot of noise” hailed from Bloemfontein.

“When they were MECs, let them tell you what they did with the money.

“Everybody who is making noise, you know they have received money into their accounts and they are still receiving it to this day,” he charged.

Magashule said he did not have money, adding that people had to contribute towards his R200,000 bail.

“I want to thank the comrades who contributed to paying my bail. Thank you very much comrades. I want to thank you from the bottom of my heart for coming here and supporting the ANC,” he said.

During his address, Magashule also threatened to release information next week that would shake things up, but did not reveal any details.

ANC secretary-general Ace Magashule was released on bail of R200,000 after he made his first appearance in a packed Bloemfontein magistrate's court ...
Politics
1 year ago