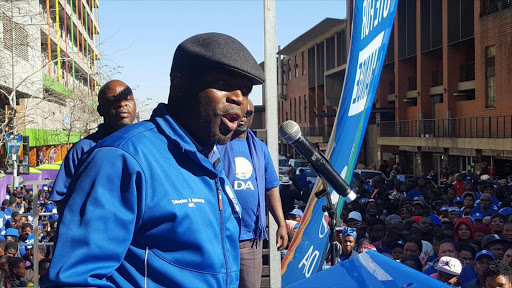 Solly Msimanga speaks to supporters at a rally in Johannesburg.
Image: Genevieve Quintal

Former Tshwane mayor Solly Msimanga has been elected as the new leader of the DA in Gauteng.

Msimanga beat DA MP James Lorimer by getting 75% of the vote at the party's virtual elective conference on Saturday.

He previously held the role on an interim basis after the abrupt resignation of former leader John Moodey, who has since joined Herman Mashaba's ActionSA.

A member of the Gauteng provincial legislature, Fred Nel, was chosen as provincial chair. He replaces Mike Moriarty, who left his position to contest for the DA federal council chair but was defeated by Helen Zille.

Addressing the provincial congress after his win, Msimanga said freedom was not yet a reality for many South Africans.

“Yes we have the right to vote, we have freedom of speech, we have freedom of association, but what does that mean when we still have millions of our people living in conditions of squalor? When half of the youth cannot find meaningful employment?” he said.

Political parties in Gauteng are optimistic of victory after by-elections in several municipalities on Wednesday.
Politics
7 months ago

State funds were being used to enrich politicians instead of uplifting millions of South Africans. Women and children were being subjected to inhumane conditions while rural and farm murders were the order of the day.

“Democrats, we have to fight and we have to be the champions of this freedom. We have to make sure that this freedom, which so many died for so many years ago, is a freedom that we don't take for granted,” said Msimanga.

He said the country needed the DA to fight for them and people of Gauteng were calling for a focused and united DA.

Msimanga said during his campaign he did not seek endorsements for fear of creating divisions.

“I wanted to be a leader for all our members, not for some and not for a faction. It is important that we unite as a party because that is what our members and voters want to see. Nobody wants to support a divided house,” he said.

Party members and activists should work hard in communities in the run-up to next year's local government elections to avoid a similar outcome to this week, where the DA lost ground in countrywide by-elections.

The ANC has emerged stronger from Wednesday's hotly contested by-elections, retaining 64 municipal wards across the country, winning six new ones and ...
Politics
7 months ago

‘They must forget it’: DA’s opposition status is in danger, warn analysts

Steenhuisen and Zille’s wins could lead to the party struggling to woo black voters, they say
News
7 months ago