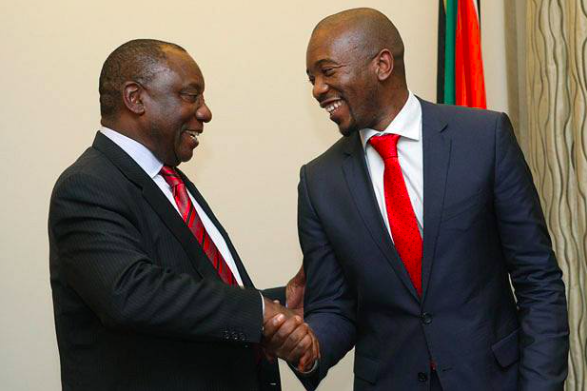 Ramaphosa, who celebrated his 68th birthday on Tuesday, was showered with wishes from many South Africans, and some messages stood out more than others.

In his birthday message to the president, Maimane said his family's wish was for Ramaphosa to have the wisdom to choose the “right friends” and the courage “to confront the evils facing this country and region”.

“Happy birthday to you Cyril Ramaphosa. My family keeps you in our prayers,” he said.

“We pray that you may have the courage at such a time as this to confront the evils facing this country and region. We pray for the wisdom to choose the right friends. May the Lord guide your hand.”

Happy birthday to you @CyrilRamaphosa. My family keeps you in our prayers.

We pray that you may have the courage at such a time as this to confront the evils facing this country and region.

We pray for the wisdom to choose the right friends. May the Lord guide your hand.

While the birthday wishes may have seemed innocent to some, many social media users drew their own conclusions.

In a separate tweet, Maimane slammed Ramaphosa for only choosing to respond to his “friend”, Zimbabwean president Emmerson Mnangagwa, and avoiding all the other messages.

Out of all the thousands tweets which tag the president. Tweets on GBV, tweets about the SABC, tweets about missing Covid19 funds.

Out of all the people who engage the president, on positive and negative issues. This is who he chose to respond to and call “friend”. https://t.co/M0hQPQmW50

What Ramaphosa got up to on his birthday

The president led the SA delegation during his participation in the Brics virtual summit.

Brics is an association of five major emerging countries, namely Brazil, Russia, India, China and SA, which together represent about 42% of the global population, 23% of GDP, 30% of the world's territory and 18 % of global trade.

The summit was chaired by Russian president Vladimir Putin, under the theme “Brics Partnership for Global Stability, Shared Security and Innovative Growth”.

Ramaphosa called on fellow members of Brics to unite and demonstrate “collective will and to provide leadership”.

“This pandemic has taught us the necessity of strengthening health systems and being prepared for future emergencies of this nature and scale. It has shown us the importance of investing in science, technology and innovation,” said Ramaphosa.

“Above all, it has taught us that international solidarity must pave the way to stability, security and economic growth. In this regard, I wish to commend the Russian Federation for its leadership of Brics during this challenging time.”

President Cyril Ramaphosa had a phone call with US President-elect Joe Biden on Tuesday evening to discuss strengthening US-Africa relations and ...
Politics
5 months ago

Why was Malawi president’s flight delayed ... and were the Bushiris involved?

Malawian and SA authorities have conflicting explanations, as president’s aide denies he knows the prophet
Politics
5 months ago

Dear South Africa has filed an urgent application in the Pretoria high court asking it to review and set aside the extension of the national state of ...
News
5 months ago
Next Article