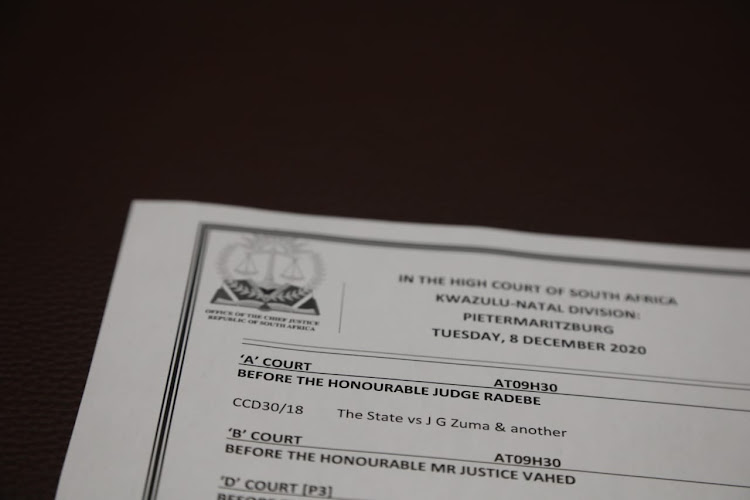 Former president Jacob Zuma did not make an appearance in the high court on Tuesday.
Image: Sandile Ndlovu

The criminal proceedings against former president Jacob Zuma and French arms manufacturer Thales have been postponed to February 23 next year.

Zuma and a representative from Thales were not in the dock. Radebe said both were excused with the court's permission.

She said there were outstanding technical matters relating to pretrial issues, such as:

Radebe said Thales's civil review application for clarity on the racketeering charges against it must be finalised by February 23.

Zuma is accused of receiving an annual bribe of R500,000 from Thales for protection from an investigation into the controversial multibillion-rand arms deal.

The "arms deal" trial of former president Jacob Zuma has been provisionally postponed to begin on February 23 2021. As well as charges of corruption, fraud and racketeering, Zuma is accused of receiving an annual bribe of R500,000 from Thales for protection from an investigation into the controversial multibillion-rand arms deal.

Why Zuma is, and is not, a special case

The first hurdle for the application to the Constitutional Court to compel former president Jacob Zuma to testify at the state capture commission ...
News
1 year ago

The state capture inquiry has filed an urgent application to the Constitutional Court, asking it to order former president Jacob Zuma to comply with ...
Politics
1 year ago

The Pietermaritzburg high court must rule on whether Thales SA is an "unfortunate unfair casualty" of the more than decade-long process to prosecute ...
News
1 year ago