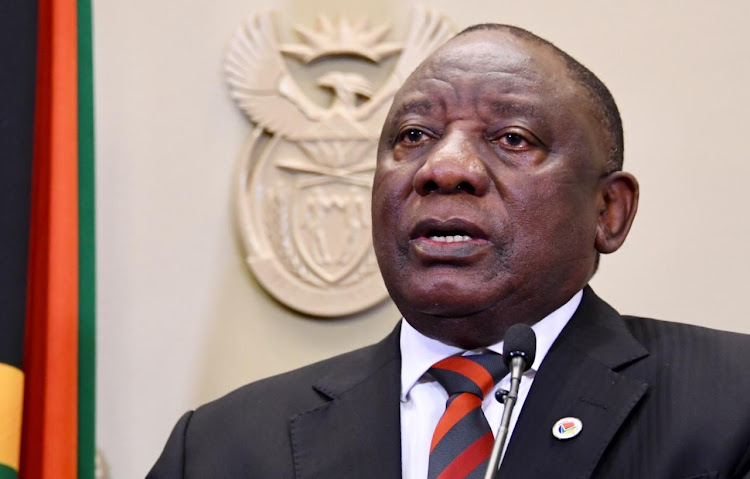 President Cyril Ramaphosa said on Monday, December 28 2020 that SA would revert to level 3 of the lockdown in response to the second wave of Covid-19.
Image: GCIS

President Cyril Ramaphosa has read South Africans the riot act, lambasting the nation for “simply letting their guard down” and “failure as a people to simply take responsibility” for the rapid spread of Covid-19.

An emotional Ramaphosa appeared close to shedding a tear during his announcement, placing the country on alert level three on recommendations made by the National Coronavirus Command Council (NCCC), President’s Coordinating Council (PCC) and cabinet.

“We have let down our guard, and unfortunately we are now paying the price. We have not been wearing masks. We are not washing our hands or sanitising. And we are not keeping a safe distance from others. We have continued to host and attend social gatherings and events that in many cases flout public health regulations,” he said.

“As has been the case previously, social gatherings substantially increase the risk of transmission. Venues are often poorly ventilated and their permitted capacity is being exceeded. Hand sanitiser is not being used, and masks are being worn to gain entry, only to be taken off once inside.

“In these same social gatherings, the consumption of alcohol in restaurants, in nightclubs and taverns has contributed to risky behaviour like not wearing masks and not observing social distancing. Excessive alcohol consumption is also driving up the number of trauma cases in our hospitals.”

As the country prepared to usher in the New Year, Ramaphosa said there was little to celebrate because there were nearly 27,000 South Africans who had died from Covid-19. On Sunday the number of infections surpassed the million mark.

Boozing revellers remain a problem for police, according to Gauteng law enforcement.
News
1 year ago

There were more than 50,000 new cases reported since Christmas Eve, the majority of them emerging in KwaZulu-Natal, Western Cape, Gauteng and the Eastern Cape. He said infections were also rising alarmingly in Limpopo.

The president said scientists were studying a new variant of the virus called 501.V2 and its spread, which appeared to be more contagious than the virus that drove the first wave of infections. “The rapid rise in infections is being fuelled by so-called superspreader events, including end-of-year functions, family and social gatherings, and music and cultural events.”

Research had shown that the relaxation of restrictions on the sale of alcohol had a direct affect on the number of trauma cases at hospitals - which had shown an increase.

“These trauma cases are putting an unnecessary strain on our already stretched public health facilities. Our hospitals, both private and public, are already close to full capacity in a number of provinces, and ICU beds are either full already or rapidly filling up.”

Placing the country on lockdown level 3, he said all indoor and outdoor gatherings would be prohibited for 14 days except for funerals and other limited exceptions as detailed in the regulations, such as restaurants, museums, gyms and casinos.

“Funerals may not be attended by more than 50 people, with social distancing. Every business premises must determine the maximum number of staff and customers permitted at any one time based on our social-distancing guidelines and may not exceed that limit.”

The nationwide curfew will be extended from 9pm to 6am.

Covid-19 pandemic: it was a time for heroes across the land

A year that to all intents and purposes began only on March 27 when SA went into hard lockdown brought lashings of misery and hardship, most keenly ...
News
1 year ago

“Apart from permitted workers and for medical and security emergencies, nobody is allowed outside their place of residence during curfew. Non-essential establishments – including shops, restaurants, bars and all cultural venues – must close at 8pm. The list of these establishments will be released shortly.”

From now, he said, it was compulsory for every person to wear a mask in public.

While the liquor industry is a major employer and an important contributor to the economy, Ramaphosa said saving lives was more important.

“Reckless behaviour due to alcohol intoxication has contributed to increased transmission. Alcohol related accidents and violence are putting pressure on our hospital emergency units ...”

He then announced that the sale of alcohol from retail outlets and the on-site consumption of alcohol would not be permitted.

“The prohibition on consuming alcohol in public spaces like parks and beaches remains.

"Distribution and transportation will be prohibited, with exceptions that will be explained by the minister. These regulations may be reviewed within the next few weeks if we see a sustained decline in infections and hospital admissions.”

Night clubs and businesses engaged in the sale and transportation of liquor were also not permitted to operate under the new lockdown level 3 restrictions.

In Gauteng, they were identified as the West Rand, Tshwane, Ekurhuleni and Johannesburg. And in the Western Cape, the West Coast District, Overberg District, Winelands District, Cape Town and Central Karoo District were declared hotspots in addition to the Garden Route.

In the North West, Bojanala District was declared a hotspot and in Limpopo, the Waterberg District and the Capricorn District were declared hotspots.

In addition, the National Coronavirus Command Council decided that all beaches, dams, lakes, rivers, public parks and public swimming pools in hotspot areas would be closed from Tuesday.

Paying homage to front line workers he said, “Our front line health care workers, who have put their lives on the line over the past nine months to care for the ill, are becoming infected in higher numbers. They are exhausted, and they are struggling under the strain of the second wave.

“During the month of December, 4,630 public sector health employees contracted Covid-19, bringing the total number infected since the start of the pandemic to over 41,000.

“These brave men and women, who have kept our hospitals and clinics open and running through their resilience, courage and professionalism are now at even greater risk than before. They are themselves almost at break point. They could lose their lives. More families will mourn. All because of our actions, and our failure to take responsibility.”

“We can confirm that we have signed off on the agreement with Covax and the Solidarity Fund has made the initial payment of R283m to the facility ... We are part of the first group of countries that will receive an allocation of vaccines from Covax. We have been advised that we should expect the vaccines in the second quarter of 2021.”

He said the government was also having parallel bilateral discussions with a number of vaccine manufacturers, and would make further announcements once firm agreements were in place.

Ramaphosa encouraged the nation to light a candle to remember those who lost their lives during the deadly pandemic.

Level 3 restrictions will be in place until January 15 2021.

IN FULL | Ramaphosa's emotional plea to SA as infections soar

President Cyril Ramaphosa unveiled tougher lockdown restrictions on Monday evening in response to a second wave of Covid-19 which he described as an ...
Politics
1 year ago

A nurse was killed on her way to work at Elim Hospital after an allegedly drunk minibus taxi driver crashed into her car in Limpopo.
News
1 year ago

DA MP Dean Macpherson has questioned the government's plans for rolling out the Covid-19 vaccine, claiming lockdowns, like load-shedding, may soon ...
Politics
1 year ago