WATCH | Laughing through the wound: 5 hilarious times Ramaphosa had us LOLing under lockdown 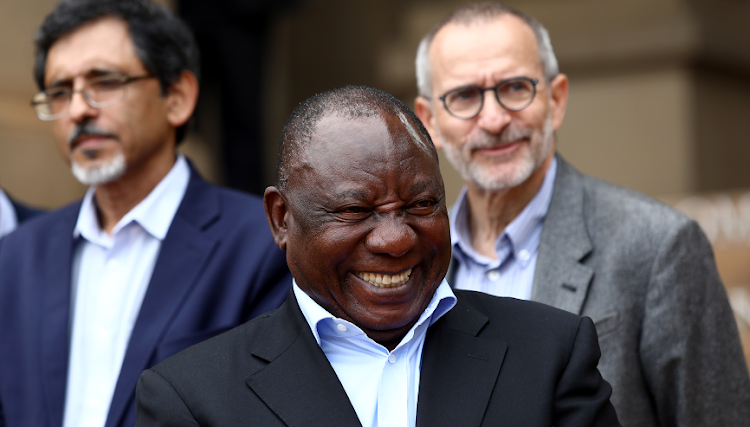 While 2020 was a tough year for South Africans, with the Covid-19 pandemic wreaking havoc on the health system, economy and personal lives of many, President Cyril Ramaphosa has at times given the nation something to smile about.

Often labelled the bearer of bad news, or the Grinch who stole Christmas, Ramaphosa announced a nationwide lockdown in March and several restrictions since in his many addresses to the nation this year.

And while many of these speeches left Mzansi deep in their feels, occasionally they brought hilarious moments.

Here are five times the president made us giggle as a nation this year:

There was a sombre mood when Ramaphosa addressed the nation on the government's response to the global Covid-19 pandemic in March.

Announcing several interventions in an attempt to curb the spread of coronavirus, Ramaphosa suggested an elbow greeting, as an alternative to handshakes, to stop people spreading the virus to each other.

“In essence, we are calling for a change of behaviour among all South Africans. We must minimise physical contact with other people and encourage the elbow greeting rather than shaking hands,” the president said.

Well, it wasn't long before the demonstration became an amapiano hit!

We shall never know peace!! 😒 pic.twitter.com/vryC9lad7L

Laughing at nationalisation of hospitals?

The video was taken during a media briefing after a meeting between Ramaphosa and leaders of opposition parties to discuss an action plan to slow down the spread of coronavirus.

Malema said hospitals had to work with the government to avoid nationalisation, but something tickled Ramaphosa's funny bone and he couldn't help but laugh live on air.

When the nationwide lockdown to curb the spread of the virus was later extended, Ramaphosa again became a meme, when he joked that he had said the restrictions would ease in April, but didn't say of which year.

In a light hearted moment Ramaphosa made reference to this meme 😅 pic.twitter.com/V1IN1Mux0a

In April, South Africans were left in stitches by Ramaphosa's struggle to put on a cloth mask during an address to the nation.

The president tried to put his mask on at the end of his speech but things went pear-shaped and he ended up hooking it over his eyes instead of his mouth.

He topped the trends list for the moemish and later joked about it with reporters.

“I'm going to open a TV channel where I'm going to teach people how to put on a mask. So you can enrol [and learn] how a mask is put on.”

Ramaphosa was like "If you cnt see the virus, then it doesn't exist 😂😂😂😂😂😂" #maskchallenge pic.twitter.com/EInsGVZp5F

Ramaphosa again became the joke in November when bored social media users decided to “dress up” the president during his address to the nation.

Using beauty filters and stickers, tweeps shared their pictures and videos of Ramaphosa looking fabulous on the TL.

WATCH | Ramaphosa laughing at Malema's threats to nationalise hospitals is everything

WATCH | LOL! Ramaphosa on face mask mishap - 'I'll teach you how to wear it'

The president clearly knows what people say on social media.
Politics
1 year ago

The bad, the booze & the beauty filter: Here's what Mzansi thought of Ramaphosa's Covid-19 address