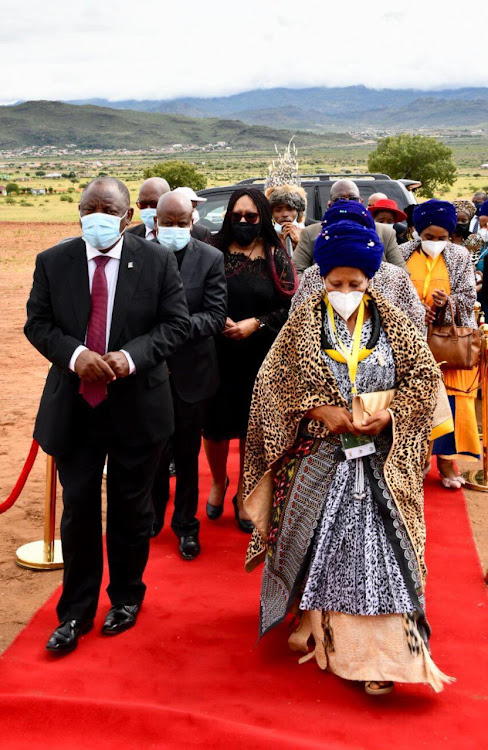 Thulare, 40, died a week ago, less than a year since he ascended to the throne.

“It is with a deep sense of grief that we pay our last respects to Victor Thulare III,” said Ramaphosa at Thulare’s funeral in Limpopo on Sunday.

“The kingdom is once again engulfed by a very dark cloud. It was not so long ago when we welcomed the reign of a promising new leader. The passing of Kgoshi kgolo Thulare the third, who was so youthful, so visionary, so promising, so far-sighted and so full of life, has shaken our very being. We mourn with the royal family and the entire kingdom over this great loss.”

He said those who came before Thulare, “bravely” fought against colonialism, oppression, the theft of their land and unjust taxation of their people without representation.

“In his veins, he carries the blood of resistance. As he is embraced by his distinguished ancestors on this side, we are left weeping.

“As government we convey our deepest sympathies and condolences to the royal family and the people of this province for this great loss.”

Ramaphosa said while the government wanted to give Thulare a funeral befitting his status, it was constrained by the coronavirus pandemic.

“It was this pandemic that prevented my planned visit to the king and to the royal household early in January. This visit was meant to be part of the commemoration of the formation of the ANC on January 8, in which the kings and the chiefs of this country played such a central part.”

“The time will come when we will be able to pay tribute to our loved ones. For now let us be safe and save lives. This pandemic has changed so much in our lives.

“As we lay the king to rest, the country is in the midst of a second wave of the coronavirus infection, far more greater and vicious and for more destructive than what we experienced before. Many more people are infected,” Ramaphosa said.

He praised Thulare for having had a “master plan” to build a city in Sekhukhuneland.

“We pay tribute to him for having been a far-sighted leader of our people here.”

He said Thulare had set out to lead his people on a path of economic prosperity.

“He used to say ‘I am still young. I still have agility’.

“He wanted every member of his nation to benefit from all economic activities and all opportunities in this area. He declared himself a sworn enemy of corruption.

“We have lost a measured voice of reason, a shining example of traditional leadership.”

“Let his dreams not die. Let us not bury the vision he had with him. May all his economic initiatives be sustained and carried forward.”

Ramaphosa commended the royal family for limiting the number of people attending the funeral and for maintaining social distancing.

He also called on the public to be diligent in observing health measures.

He said in the coming weeks and months, the government would begin a mass vaccination programme that was set to reduce infections as it reached more people.

“We will increase our efforts to rebuild our economic, restoring the jobs that have been lost and providing support to struggling households,” Ramaphosa said.

Less than a year after being inaugurated as Bapedi king, Thulare Victor Thulare III has died aged 40.
News
3 months ago

The second wave of the coronavirus has continued where the first left off, dealing out fatal blow after fatal blow.
Opinion & Analysis
3 months ago

President Cyril Ramaphosa has declared a special official funeral, category 1, for late Bapedi king Thulare Victor Thulare III, who will be laid to ...
News
2 months ago
Next Article