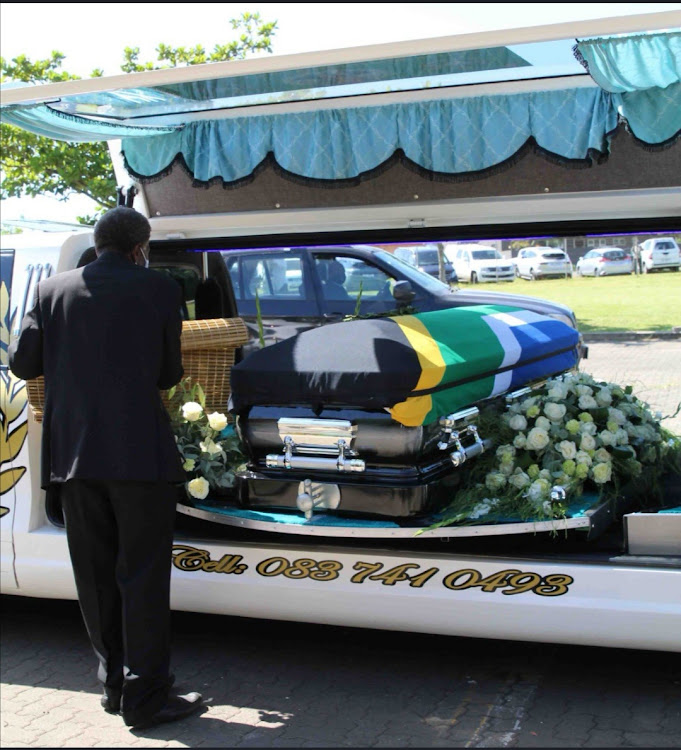 Flags flew at half mast in KwaZulu-Natal for the second day, when transport, community safety and liaison MEC Bheki Ntuli was laid to rest in Empangeni on Thursday.

Ntuli, who passed away on Saturday due to Covid-19 related complications, was given a special official provincial funeral.

On Wednesday, veteran broadcaster Welcome Nzimande was afforded the same honour, when he was laid to rest in Richmond.

Addressing mourners at Ntuli's funeral, transport minister Fikile Mbalula said the family and the nation had lost a champion for the improvement of people's lives.

“Rejoice because you are not alone in this pain. The fundamental lesson we must learn from comrade Bheki’s life is that principle is sacrosanct. Comrade Bheki Ntuli has bequeathed us a legacy.

“We must build on it and complete the task of delivering a better life for the people. That is what comrade Bheki stood for throughout his life. He was one with the people and he never wavered in his dedication,” said Mbalula.

Ntuli cut his political teeth working in the ANC underground structures and was a freedom fighter, who was involved in uMkhonto WeSizwe’s operations.

He had also previously served as a shop steward of the National Union of Metal Workers of South Africa (Numsa), and was involved in the formation of ANC structures in the then Northern Natal region.

KwaZulu-Natal premier Sihle Zikalala told mourners that Covid-19 had robbed the nation of a “modern-day saviour”.

“The reality of this nightmare has struck closer to home. It has robbed our nation of a modern-day saviour who was a gift from the ancestors, and so with heavy hearts we are gathered here to say farewell.

“Comrade Ntuli understood that he could not call himself a freedom fighter if he himself was not prepared to die for that freedom”, he said.

Zikalala said Ntuli’s commitment to politics was unwavering, and that he always completed his tasks without fault.

“His participation in the struggle earned him enemies who were hell-bent on trying to kill him.

“He survived several attempts on his life and lost four family members, including his mother. But he knew that after that there must be life ... there must be reconciliation,” said Zikalala.

“How to believe that someone whose presence and warmth was felt even in sombre moments ...

“How do we say goodbye to someone who was able to comfort, bring a smile, and trigger a laugh during our solemn moments and times of grief?”

Condolences are streaming in for KwaZulu-Natal transport MEC Bheki Ntuli, who died at a Durban hospital on Saturday from Covid-19 related ...
Politics
3 months ago

Zikalala described Ntuli as a strong opponent of “patriarchy and gender-based violence, a leader who fiercely criticised those who practised and supported such nefarious acts.

“He wanted the women of our country to enjoy the fruits of freedom by travelling the valleys and streets of our country and province without fear of being attacked or harassed.

“He was working around the clock to reduce crime and gender-based violence in hotspots like Inanda, KwaMashu, and Plessislaer.”

He praised Ntuli for his work in trying to reduce taxi violence and road fatalities in the province.

“The carnage on our roads was a sore point for him, and he leaves us at a time when he was seized with the task of changing the mindset of drivers to reduce fatalities on the KwaZulu-Natal roads.

“He was at the forefront in the battle against Covid-19. He personally conducted roadblocks to ensure that road users and commuters adhered to Covid-19 protocols and regulations.

“Such was his determination to slow the spread of the pandemic in the province. Nothing would be more befitting to his memory than for all of us to embrace the preventive measures to be safe from the pandemic,” said Zikalala.