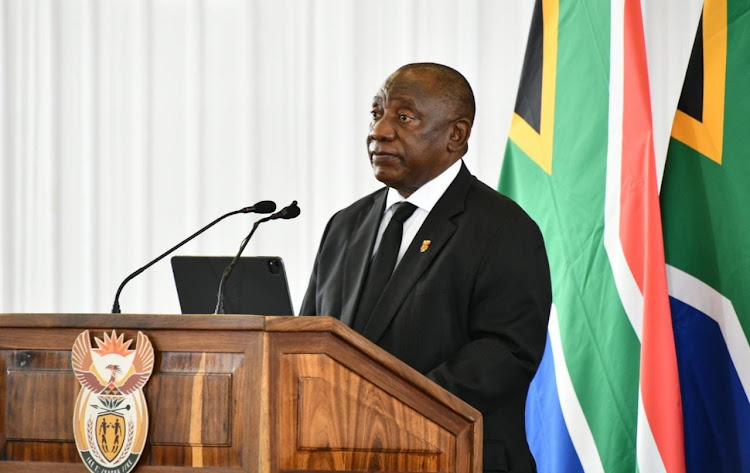 The death of minister in the presidency Jackson Mthembu has reminded South Africans that we have more in common than we would like to believe, President Cyril Ramaphosa said on Sunday.

“Mthembu’s death stilled the bickering and clutter that has consumed us in recent times and united in our sorrow,” said Ramaphosa while paying homage to Mthembu, who died of Covid-19 complications on Thursday at the age of 62.

The funeral service, which took place under strict Covid-19 protocols, was held at the Sacred Heart Catholic Church in Ackerville Township in Emalahleni, Mpumalanga.

“We have lost a man who was able to transcend political differences, and to reach out and forge alliances in pursuit of a common goal. A person who was admired and respected across political party lines. We need more men and women like him, who all understand that we are heading in the same direction.”

Ramaphosa said Mthembu was a man who was loved by many in society.

“As for me, I have lost a dear friend and it is a loss that I feel most keenly,” he said.

Ramaphosa said he was shocked when he heard the news of Mthembu’s sudden death.

“I was sorrowful and heartbroken when I received the news of Jackson Mthembu’s passing from minister of health Dr Zweli Mkhize and the doctors in charge of treating him on Thursday. And with a heavy heart I immediately called the officials of the ANC.”

A nurse who looked after the late minister Jackson Mthembu while he was in hospital described him as a “calm” and “humble soul”.
Politics
1 year ago

“The news of Jackson’s passing has struck a deep and solemn note to many of us,” said Ramaphosa, adding that coronavirus had caused so much sorrow in SA.

“We have lost so many lives to this deadly disease. There have been many tears and grief in so many homes, we have had to ensure so many things that at times, it has seemed too great a grief to bear and now the stroke of death has taken the very one who has been our rock and our tower of strength at this dreadful moment in our country's history.”

We have lost a man who was able forge alliances in pursuit of a common goal. We need more men and women like him, who all understand that we are heading in the same direction

Ramaphosa said Mthembu, as the minister in the presidency, had many people who looked to him for reassurance as the government communicated its decisions on the pandemic.

“He was at the forefront of our national effort to contain the coronavirus pandemic, the very pandemic that has now claimed his life.”

Mthembu brought certainly and clarity and utmost professionalism to every task that he was assigned to, said Ramaphosa, adding that Mthembu had left a huge void in the government.

“Some have even suggested that Jackson Mthembu is irreplaceable. That there was only one Jackson Mthembu. That void is in our movement, to which he dedicated his life and the country ... Mvelase was among those who were infinitely rare in our society.”

He said Mthembu was a man who was generous in spirit and had a charming personality.

“He had the reassuring ability to uplift anybody’s mood, including my mood, and to fortify my resolve in even the most difficult situations. His sense of humour was often irreverent. He laughed like someone who really loved life. He laughed about many things that he probably should have not laughed about. Just as he cared deeply about everything that he should.”

Ramaphosa said he would remember Mthembu as a “principled and courageous man in times of both calm and great difficulty”.

But, above many qualities, Ramaphosa lauded Mthembu for his honesty and for never hesitating to speak up no matter what the personal cost was.

He lived a life full of meaning, said Ramaphosa.

Earlier Mavis Mahlakoane, who nursed Mthembu at Netcare Milpark Hospital, relayed details of how during his last moments Mthembu had asked to call Ramaphosa because he was “the one man who understood him”.

“Cyril, will be so disappointed,” said Mthembu just before taking his last breath at 1.30pm on Thursday.

Mthembu is expected to be laid to rest at the Old Pretoria Road Cemetery in Emalahleni.

When the wife of late minister in the presidency Jackson Mthembu saw President Cyril Ramaphosa, who was waiting for her outside of the Roman Catholic ...
Politics
1 year ago

The funeral of the late minister in the presidency, Jackson Mthembu will be held in his hometown in Mpumalanga on Sunday.
Politics
1 year ago