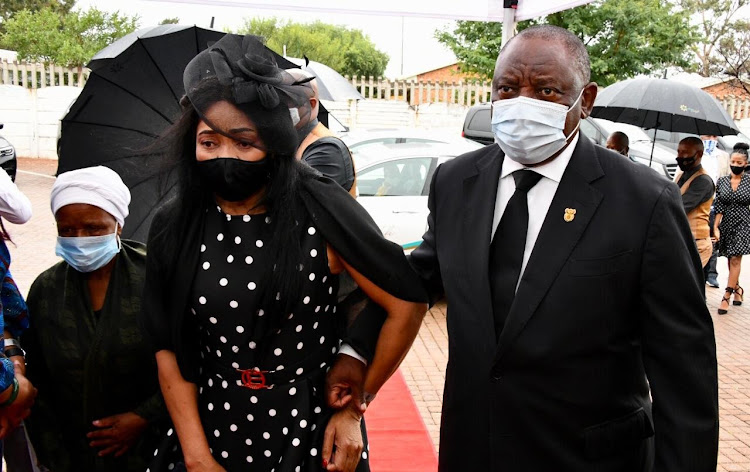 President Cyril Ramaphosa and the family of Jackson Mthembu arriving at the Roman Catholic Church in Ackerville, eMalahleni in Mpumalanga, for the official funeral service.
Image: SA Government/Twitter

When the wife of the late minister in the presidency Jackson Mthembu saw President Cyril Ramaphosa, who was waiting for her outside the Roman Catholic Church, she wept.

This is where Thembi Mthembu would on Sunday bid farewell to her husband and the father of her children. He died on Thursday from Covid-19 related complications.

The late minister has been accorded an official (category 1) state funeral.

Ramaphosa is expected to deliver the eulogy at the funeral which is taking place at the Roman Catholic Church near Mthembu's home at Ackerville, Emalahleni, in Mpumalanga.

When the hearse arrived at his home, several family members could be seen fighting back tears.

Before leaving to the Roman Catholic Church, a family elder performed a family ritual of paying the final respects to Mthembu while his body was in a casket outside his home. 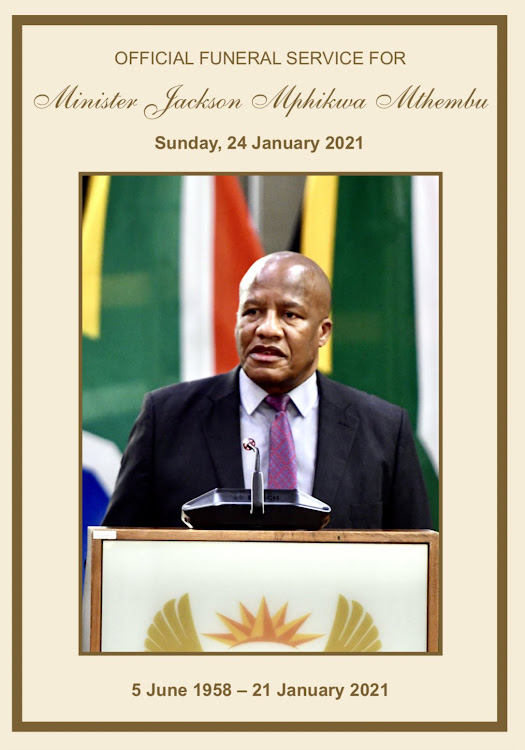 According to his obituary, Mthembu was born at Schoongezicht farm in Emalahleni (formerly Witbank) in Mpumalanga on June 5 1958.

He was the firstborn son of Mama Rosie Nantoni Mthembu.

In his formative years, he attended Schoongezicht American Board Primary School and Kromkrans Farm School before moving to Elukhanyisweni Secondary School in Emalahleni.

The anti-apartheid activist, who was part of the liberation struggle inside SA, cut his political teeth in student politics in the 1970s and his activism continued when he was a student at the University of Fort Hare, resulting in his expulsion in 1980.

Later Mthembu contributed immensely to the establishment of the Union of Metal Workers, in which he served as a senior shop steward at Highveld Steel Corporation.

Tributes continue to pour in from all facets of society for the late minister in the presidency, Jackson Mthembu, who succumbed to Covid-19 related ...
Politics
1 year ago

During the state of emergency in the 1980s, his political activism resulted in him spending several months in detention without trial, mostly in solitary confinement.

Between 1986 and 1988, he was charged with sabotage, treason and terrorism, and tried together with 30 other activists from Emalahleni in what was known as the Bethal Terrorism Trial. He was later acquitted.

He later rose through the ranks when he was elected as the deputy regional secretary of the UDF and after the unbanning of the ANC, between 1990 and 1994, he worked as the full time ANC spokesperson in Mpumalanga.

A nurse who looked after the late minister Jackson Mthembu while he was in hospital described him as a “calm” and “humble soul”.
Politics
1 year ago

He served in several strategic roles including the ANC’s national executive committee since 2007, as a MP, national ANC spokesperson under President Nelson Mandela from 1995 to 1997, and was appointed to the same role again from 2009 to 2014. He also served as the ANC chief whip, and minister in the presidency

Mthembu is survived by his siblings, wife Thembi Mthembu, their children and a grandchild.

The funeral of the late minister in the presidency, Jackson Mthembu will be held in his hometown in Mpumalanga on Sunday.
Politics
1 year ago

Jackson Mthembu was described by the public and members of the media, who he regularly interacted with on government press briefings, as a “humble ...
Opinion & Analysis
1 year ago

Jackson Mthembu made our job easier

I was trying to locate the seatbelt of my aisle seat on a flight to Kimberley last year when I felt a punch in my ribs. I looked up and it was ...
Opinion & Analysis
1 year ago