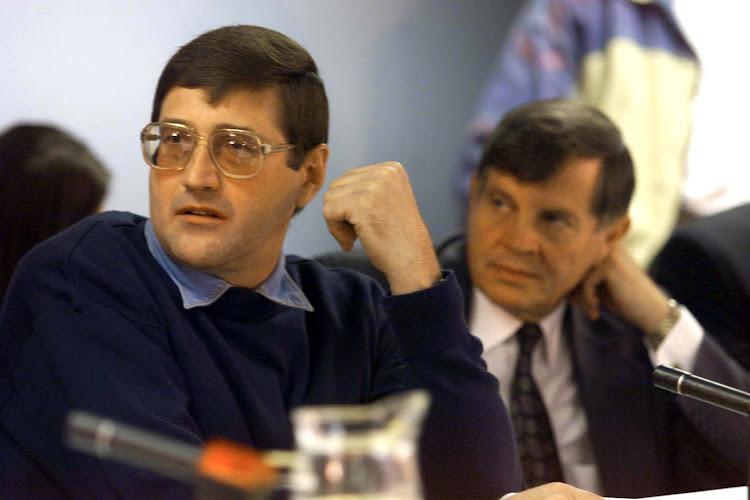 Eugene de Kock, left, appears at the Truth And Reconciliation Commission (TRC) amnesty hearing with his lawyer Schalk Hugo on May 24 1999.
Image: REUTERS

The ANC government which paroled apartheid state assassin Eugene de Kock did not stop there — even spending R200,000 a month in taxpayers' money for his upkeep.

This was revealed at the Zondo commission on Thursday.

The evidence came from an affidavit by a “Mr Y”, but was presented by “Ms K”. The two are current State Security Agency (SSA) spooks. Their real identities have been withheld.

The state capture inquiry heard during the testimony of the unidentified witness that the government, through SSA “Operation Lock”, spent R200,000 on De Kock every month after his release.

The expenditure included a state-sponsored safe house for the assassin and a R40,000 monthly “salary”.

The reasons for this expenditure were not revealed.

De Kock is a former colonel in the police force of the apartheid regime. His claim to fame is commanding the infamous Vlakplaas unit which specialised in executing and torturing anti-apartheid activists.

The testimony is continuing.

LISTEN | Episode 1: The little girl who that vanished

Fingers are being pointed at former president Jacob Zuma again, at the state capture inquiry. A witness identified only as 'Ms K', says State ...
Politics
1 year ago

'I had nothing to do with it': State security cop unmoved by Neil Aggett's death

Joseph Woensdregt, a police officer called in to interrogate Dr Neil Aggett, conceded on Tuesday that he had not been bothered by his death because ...
News
1 year ago

Why have the men who pulled the strings of apartheid never been charged?

I was a child but I have a distinct memory of May Day 1989 when the news of David Webster's death came over the radio. Webster, an anthropologist and ...
News
3 years ago