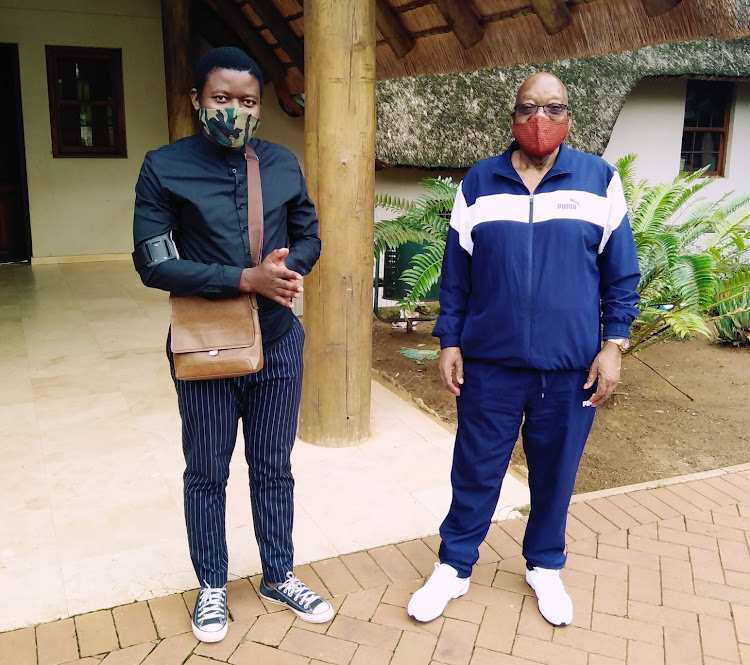 #FeesMustFall activist Bonginkosi Khanyile and former president Jacob Zuma were apparently scheduled to meet on Wednesday at Khanyile's home in Umlazi, where he is under house arrest.
Image: Twitter/Bonginkosi Khanyile

Former president Jacob Zuma was a no-show on Wednesday for what was apparently meant to have been a planned meeting with #FeesMustFall activist Bonginkosi Khanyile at his home in Umlazi, south of Durban.

On Wednesday morning Khanyile, who is under house arrest, told TimesLIVE he could not divulge the context of Zuma’s visit until they had concluded their talks.

A few hours after confirming the meeting with Zuma, Khanyile said the former president had postponed the meeting.

He could not divulge what their meeting was meant to be about.

“I can only divulge once I have met him. We have been in communication with him, but he deemed it fit to come to visit me. I knew for some time he would be coming but I was only informed on Tuesday that he has confirmed.”

Zuma and the man who led the chants for him to 'pay back the money' over his Nkandla home are plotting a weekend meeting, seemingly at that same ...
Politics
1 year ago

The former Durban University of Technology student was arrested during the #FeesMustFall protests and charged on eight counts, including public violence and inciting violence, on September 2 2016.

In January 2019 he was sentenced to three years’ house arrest and ordered to submit to rehabilitation programmes and pay R5,000 or serve a three-year prison sentence suspended for five years.

Khanyile has openly shown his affiliation to Zuma.

In a tweet on Monday, Khanyile drew a comparison between Zuma’s recent refusal to appear before the state capture inquiry and Robert Sobukwe’s fight against the apartheid regime.

Just like the generation of Robert Sobukwe that defied apartheid unjust laws imposed on them. Former President Zuma has taken it upon himself to defy all unjust court rulings imposed on him. He has taken the most radical and militant stance exactly like Sobukwe during his times🤞🏿 pic.twitter.com/akYzQYtV45

The state capture inquiry will open a criminal case against former president Jacob Zuma for failing to appear before it last month, and will consider ...
News
1 year ago

Award-winning author has rubbished comparisons between Zuma and Sobukwe.
TshisaLIVE
1 year ago