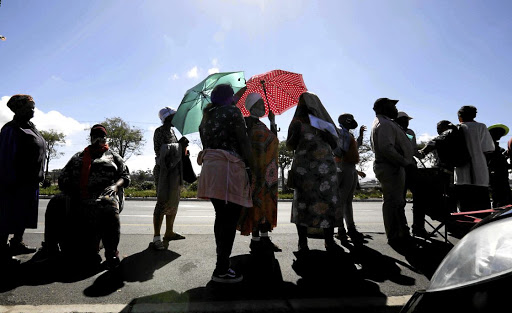 The department of social development is still awaiting a report explaining what took place when police used a water cannon against vulnerable social grant applicants in Cape Town.

“I have not received a report because remember, I indicated in the last meeting that firstly, I made it clear that no order came from us, or from myself, or Sassa [South African Social Security Agency], for the police to spray water on anybody.

“I also did indicate that it is in our interest that people who come to our service points are taken care of and are treated well,” said minister Lindiwe Zulu.

The committee sat to hear a presentation on a comprehensive action plan to address challenges pertaining to the lapsing of temporary disability grants, reapplications and  overcrowding at Sassa offices.

Social development minister Lindiwe Zulu has told parliament she was the one who stopped the water-bombing of queuing SA Social Security Agency ...
Politics
1 year ago

Department official Dianne Dunkley said staff would be rotated at local offices and ensure there was adequate personal protective equipment.

“We will deploy staff to support the local offices particularly with queue management and maintaining social distancing ... One of the big challenges we have is that we have people who will come in and block the queue. They get up really early and sell the place for clients and it is something that we do not support.”

She added that a queue management strategy had been developed, featuring separate queues and adding chairs.

Dunkley said operating hours had been increased, the department's website and social media platforms would be updated and a manual booking system had already been implemented. Communication with clients would also be improved.

“We did see an increase in the number of people at the post offices, particularly towards the end of last week, because everybody was panicking about the grant which was coming to an end and felt that if they hadn’t received their money they would not be attended to.

JUSTICE MALALA | Soon, SA will turn those water cannons on the ANC

It happened to the NUM at Marikana and it will happen to the ruling party, which is fast losing touch with its people
Opinion & Analysis
1 year ago

“We want to confirm that anybody who had been approved for the money and had not collected their money will receive the grant, even though the grant had come to an end. The money that is owed will be paid and we want to reassure everybody.”

Acting director-general Linton Mchunu suggested that a joint meeting be held between the department, the SA Post Office and parliament to address the concerns raised.

“We do think that there are a range of challenges that befall the Post Office ... but what we have done, insofar as addressing the problems that have a direct impact on the payment of grants, is that the minister has established a joint exco forum including ministers, CEOs, DGs and technical teams so that we can try to address these critical issues.”

In closing,  Zulu said, “I personally believe that certain things should come to an end. They mustn’t keep coming back and repeating themselves, especially since we are saying there are new ways of doing things ... I agree with portfolio committee members saying it is not enough to see one thing on paper but another on the ground.”

More than 100 temporary disability grant beneficiaries have been sleeping outside the SA Social Security Agency offices in Bellville, Cape Town since ...
News
1 year ago

The Black Sash has called for the intervention of President Cyril Ramaphosa after police turned a water cannon on social grant applicants queueing ...
News
1 year ago