National Assembly speaker Thandi Modise says the African Transformation Movement's (ATM's) legal challenge to her decision to not allow a secret ballot for the party’s motion of no confidence in President Cyril Ramaphosa “makes no sense”.

Modise and the ATM crossed swords at the high court in Cape Town on Wednesday regarding her decision.

The ATM, which holds two parliamentary seats, brought a motion of no confidence in Ramaphosa at the end of 2020. The party went to court after Modise declined its request to “have the house consider the motion through a secret ballot”.

Party leader Vuyolwethu Zungula argued that MPs should be able to exercise their personal conscience rather than be dictated to by parties.

Judgment was reserved on Wednesday.

Party spokesperson Sibusiso Mncwabe said they were looking forward to the ruling.

The debate on the African Transformation Movement's motion of no confidence in President Cyril Ramaphosa will no longer take place on Thursday and is ...
Politics
1 year ago

Modise asked the court to dismiss the application and saddle the ATM with “punitive costs”. She argued that the high court did not have the jurisdiction to hear the matter.

Modise said only the Constitutional Court could make a finding that parliament had failed to fulfil its constitutional obligation.

“The speaker contends that the ATM’s case lacks merit in that the ATM has failed to provide sufficient reasons why the secret ballot is the appropriate method of voting in the prevailing circumstances,” parliamentary spokesperson Moloto Mothapo said in a separate statement.

“Further, the speaker maintains that in the absence of compelling reasons for [a] secret ballot, the default position of openness and transparency in the conduct of the business of parliament should prevail.” 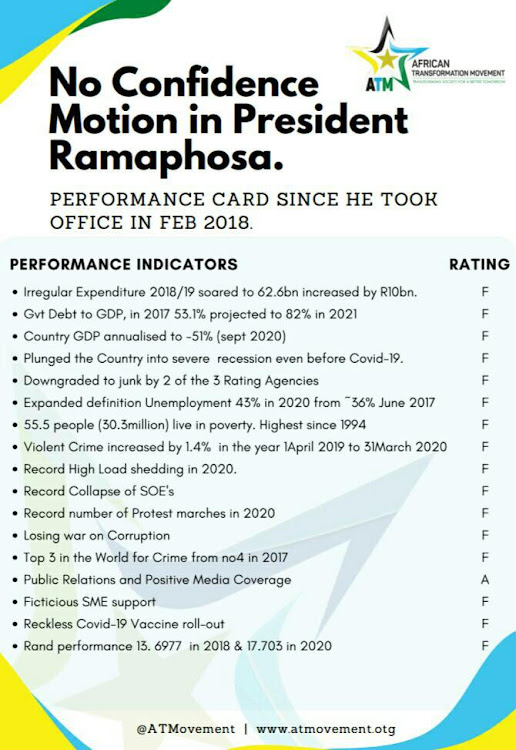 The ATM has mounted a legal challenge to national assembly speaker Thandi Modise's decision not to allow a secret ballot in the motion of no confidence in President Cyril Ramphosa.
Image: ATM

“The case is not about whether a motion of no confidence can be held by secret ballot. That has already been decided by the Constitutional Court. It is also common cause that the discretion on which method of vote [secret or open ballot] should be employed rests with the speaker.

“Instead, this case turns on whether the speaker lawfully exercised her discretion to hold an open ballot on the motion of no confidence in the president. The ATM fails to establish that the speaker did not exercise her discretion lawfully,” said Mothapo.

“It is worthwhile recalling that the ATM submitted a defective motion of no confidence which was only made compliant after the speaker’s assistance,” he added.

“After considering the resubmitted motion of no confidence, the speaker made her decision that voting on the motion would be by open ballot.

“She based this on, among other things, that [National Assembly members] swear an oath to the constitution, that the political environment was not toxified and that the constitution requires the [National Assembly] to conduct its business in an open manner. This was particularly so as ATM had failed to provide any evidence to justify its request for a secret ballot.”

If a court application for a secret ballot isn’t made before debate, party says they will ask for session to be postponed
Politics
1 year ago

The ATM sought to interdict Modise when she declined its request. That application was set down to be heard in December.

“It ultimately abandoned this and agreed to a settlement with the speaker allowing for the matter to be adjudicated over a longer time. The ATM postponed its motion of no confidence in the president, scheduled for December 3 2020, and this is still pending.

“The speaker has maintained that if the ATM provided specific, fuller, more cogent and compelling reasons to her she would reconsider the motion, including applying her mind afresh to the question of secrecy,” he said.

“Instead, the ATM has now tried to mount a new case. Merely because the ATM disagrees with the speaker’s decision does not make the decision unlawful. This is especially so where the potential consequence would be for this court to direct the speaker on how to conduct the affairs of the [National Assembly]. This issue is not new and falls within the Constitutional Court’s exclusive jurisdiction.”

In her 47-page affidavit, Modise said the court order that ATM sought “makes no sense”.

“All it asserts in these proceedings is that it is entitled to have a motion of no confidence determined by secret ballot and that I was wrong to disallow its request,” read Modise’s affidavit.

“But, having regard to the discretionary nature of my powers, and the fact that the modalities of a motion of no confidence [whether it is by secret or open ballot] do not affect the existence of the right to bring one, the ATM’s is a non-starter.”

The African Transformation Movement's postponed motion of no confidence motion in President Cyril Ramaphosa is to be send to the National Assembly's ...
Politics
1 year ago

National Assembly speaker Thandi Modise has refused to allow a secret ballot ahead of Thursday's debate and vote on a motion of no confidence in ...
Politics
1 year ago