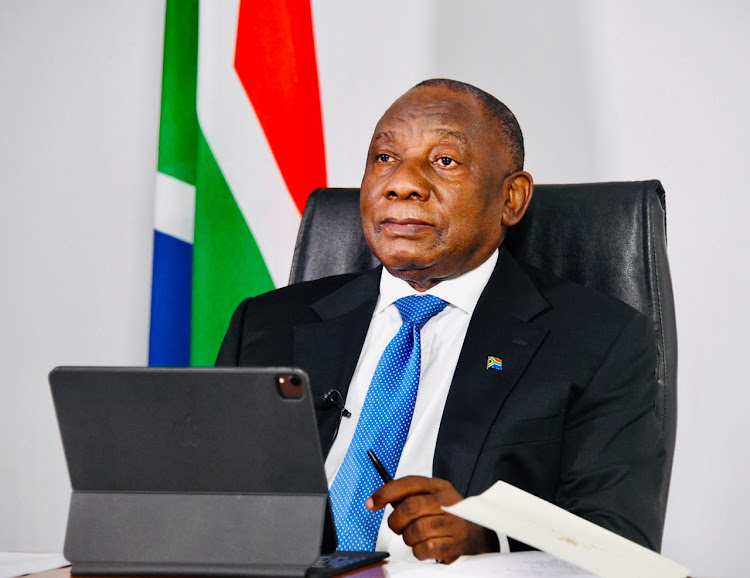 President Cyril Ramaphosa on Thursday welcomed more than R70m in pledges to assist the government in its fight against gender-based violence and femicide.
Image: GCIS

President Cyril Ramaphosa has welcomed the more than R70m in pledges to assist the government in its fight against gender-based violence and femicide.

Speaking at the launch of the first phase of the Private Sector Gender-Based Violence and Femicide Response Fund on Thursday, Ramaphosa said GBV was an issue of national importance.

“The effects of GBV are insidious, extreme, intergenerational and long-lasting, not just on victims and survivors but also on society. But by far the most significant cost is to our very nationhood. When millions of our citizens have to live in fear from violence and even death simply because they are women or girls, a part of our soul as a people is lost.

Ramaphosa described the launch as a promise to end violence perpetrated by men against women and children in SA.

“Your presence here today demonstrates your understanding that we all have to become involved to bring an end to gender-based violence. With your financial support, we will be able to step up the national response to GBV by expanding the scope of services at national, provincial and community levels,” he said.

Among those who made monetary pledges were Anglo-American, which pledged R30m, Absa, which pledged R20m, and the Ford Foundation, which also pledged R20m. The funds were expected to be allocated to community-based organisations doing valuable work in villages, towns and cities and that rely on donor funding to survive.

While the government had previously committed resources to the fight, Ramaphosa admitted some of its programmes were halted by the Covid-19 pandemic, which brought about a constrained financial climate.

“We have had to urgently divert national resources to fight the Covid-19 pandemic, and, like every other area of work, this has had an impact on our gender-based violence and femicide programmes. Nonetheless, we continue to prioritise the empowerment of women in all our programmes,” said Ramaphosa.

Wits University chancellor Dr Judy Dlamini was appointed the chairperson of the fund's board.

Ramaphosa assured stakeholders that funds were in capable hands.

“I want to reiterate that the fund will be managed and administered under the strictest principles of good governance, due diligence, transparency and accountability,” he added.

The launch follows the unveiling of the National Strategic Plan (NSP) — which was developed by a multisectoral team from across society last year.

The plan focused on interventions to provide support to survivors and their families as well as broaden access to justice and access to economic opportunities for women.

Ramaphosa said nearly R21bn was allocated to the NSP over three years.

“These contributions will make a great difference in the lives of many people. They reflect the true commitment of these valued partners to building a better society.”

More people are now vaccinated against Covid-19 than have been infected by the virus that has swept the globe over the past year, a milestone on the ...
News
1 year ago

E-hailing platform Bolt has launched a women-only service that enables female passengers to request rides from female drivers only.
News
1 year ago