Those mobilising must face disciplinary hearing if found to be ANC members, says region 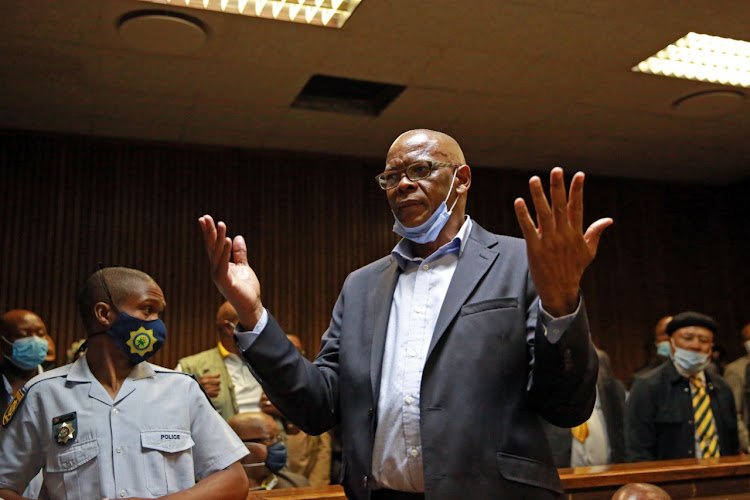 Ace Magashule in the dock during a previous appearance at the magistrate's court in Bloemfontein.
Image: Thapelo Morebudi/Sunday Times

The ANC in the Free State is pleading with its members not to head to the Bloemfontein high court next week in support of the party's secretary-general, Ace Magashule.

This was because it would contravene lockdown regulations.

“We have seen posters on social media from faceless organisers, mobilising people to attend the planned protest action outside the Bloemfontein court where all the accused will appear on Friday February 19,” the party said, adding that they were not behind this mobilisation.

“We regard this as a deliberate attempt to brazenly undermine the president’s call and the country’s laws, particularly the Covid-19 lockdown regulations which prohibit unnecessary political gatherings,” the party continued.

Branches in the eThekwini region of the ANC are mobilising a national movement in support of former president Jacob Zuma and party secretary-general ...
Politics
1 year ago

“Cele made it clear in a statement that ‘when people wittingly or unwittingly violate the lockdown regulations, police are left with no choice but to enforce the law, where in some instances this means arresting people’. We expect the police, through the directive of the provincial commissioner of SAPS, to act on this promise to ensure that no-one undermines our laws,” the party said.

“We further urge all disciplined ANC and community members not to participate in any gathering that not only contravenes lockdown regulations but has a huge potential to become a Covid-19 superspreader.

“We also appeal to the NEC to investigate and haul the organisers of this gathering to a disciplinary hearing, if found to be members of the organisation,” it added.

Magashule is charged alongside seven other people in connection with a controversial R255m asbestos eradication tender in the Free State. His co-accused, who include businessman Edwin Sodi, had been arrested and appeared in court before him.

Magashule was released on bail of R200,000. He said at the time that he did not have enough money to pay it, adding that people had to contribute towards his bail.

He is facing charges of fraud, corruption and money laundering.

During his previous court appearance, hundreds of supporters gathered outside the court in support of Magashule and waited patiently for him to address them once he was out of court. In his address, Magashule had threatened to release information which he said could shake things up, but did not reveal any details.

Magashule: a speedy trial will best protect our young democracy