'The only space Zuma needs is a space provided by a prison cell,' says FF+ 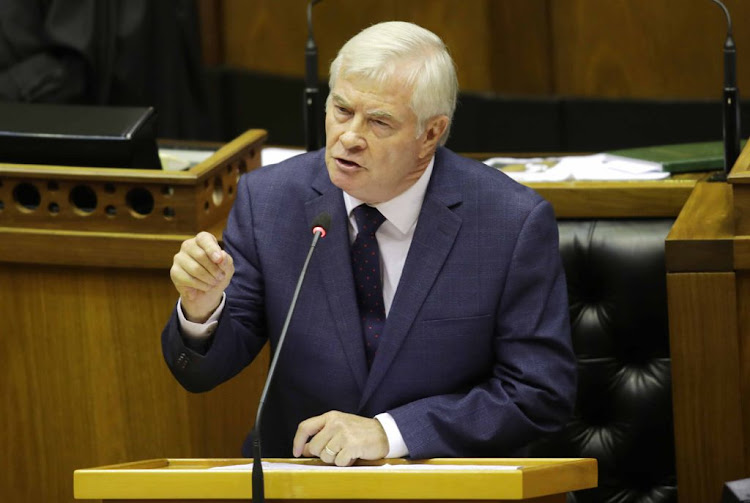 Pieter Groenewald, leader of the Freedom Front Plus, speaks during the debate on the state of the nation address on Tuesday.
Image: ESA ALEXANDER/SUNDAY TIMES

President Cyril Ramaphosa's lack of decisive action against former Jacob Zuma's public defiance of the Constitutional Court order to appear before the state capture commission was a subject of intense debate in parliament on Tuesday.

MPs from different political parties expressed their sentiments during a five-hour hybrid sitting of the state of the nation debate.

Zuma, who was meant to appear at the commission on Monday, indicated through his lawyers that he would not be present — citing his application to the high court to review the decision by the commission's chair, deputy justice Raymond Zondo, not to recuse himself.

This prompted Zondo to recommend that Zuma be arrested for being in defiance of the Constitutional Court order.

Ramaphosa has not directly commented but, two weeks ago, Ramaphosa said Zuma needed to be given time to say carefully about his decision as he was taking advice from different people.

“This is a matter which I'm sure he's going to give much more thought to, because he's being counselled by a number of people and organisations that the constitutional structure that he contributed so much to, needs to be given consideration.

“And I’m sure in his own mind, in his own time, he will say about this,” he said at the time.

However, the DA and FF plus criticised this stance.

“The only space Zuma needs is a space provided by a prison cell. The only time he needs is a couple of years determined by the judge and I can assure you that will be ample time for him to say,” said FF Plus leader, Pieter Groenewald.

Former president slams judges for helping President Cyril Ramaphosa in hiding ‘what on the face of it seem to be bribes obtained in order to win an ...
Politics
1 year ago

Meanwhile DA leader John Steenhuisen dared Ramaphosa to choose between the party and the people of SA.

“You couldn’t bring yourself to stand up for our constitution and the rule of law when our former president as well as your party’s current secretary-general [Ace Magashule] and his deputy openly defied and mocked these sacred foundations of our democracy.

“Your response was that we should all give him [Zuma] time and space to say things over. Your silence yesterday when he stuck to his word and snubbed the commission spoke volumes. None of that sounds like someone who has decided to put country before party,” said Steenhuisen.

Magashule has publicly come out in defence of Zuma, saying he had constitutional rights, had done nothing wrong, or at least nothing warranting his sacking from  the party.

This week's state of the nation address by President Cyril Ramaphosa must have been his most challenging yet, coming as it did when the nation is ...
Opinion & Analysis
1 year ago

Both Ramaphosa and Magashule said his sacking was not a matter up for discussion. However, It has since emerged that Zuma will meet party leaders to discuss his decision.

Groenewald went as far as suggesting that Ramaphosa wanted to pardon Zuma for his alleged “crimes”.

“And I am asking you a very serious question this afternoon, Honourable President, are you considering presidential pardon for Zuma? You are on record saying that you would rather be seen as a weak president but you will do everything to save the ANC.

“Zuma is at this very moment busy politically putting pressure to the ANC cause he knows you can give him presidential pardon. You should answer to the people of SA,” said Groenewald.

It remains to be seen if the ANC's top leadership managed to convince the former president to appear before the state capture inquiry.
Politics
1 year ago

He said the commission which has heard explosive testimonies, was yet to uncover more dealings of the state capture and those implicated and who allowed it to continue.

The commission, which has heard testimonies from more than 200 witnesses, has asked the apex court to extend its tenure until the end of June. A move which Holomisa rallied behind

“There is more to uncover, we must allow the Zondo commission the time and resources to finish its job. Ultimately, the money stolen must be returned to the people and the guilty must go to jail. SA needs a government that can create decent living conditions and advance the livelihoods of all the people but especially the poor,” he added

Ramaphosa was expected to respond to the debates on Thursday,

People calling for former president Jacob Zuma to be sacked from the ANC after his refusal to appear before the state capture commission are ...
Politics
1 year ago

DA leader John Steenhuisen has challenged President Cyril Ramaphosa to provide bold leadership and choose between his political party, the ANC, or ...
Politics
1 year ago

The former public protector said Zuma's public stance to defy a ConCourt order was a first of its kind from any SA president, current or former, ...
Politics
1 year ago