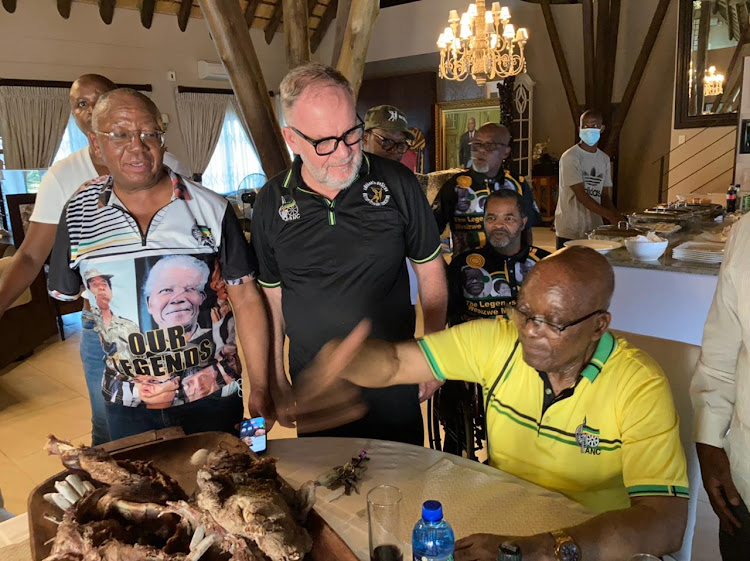 Hanekom recently took aim at the EFF and its leader after Zuma snubbed the state capture inquiry at which he was expected to testify from February 15 to 19.

Although neither the EFF nor Zuma have disclosed the contents of their meeting earlier this month, there was speculation the red berets sought to convince the embattled former president to testify before the inquiry chaired by deputy chief justice Raymond Zondo.

Zuma’s defiance of the Constitutional Court ruling compelling him to appear at the inquiry was met with an outpouring of reactions from civil society and politicians, including Hanekom.

The former minister asked: “Perhaps those who flew by helicopter to meet former president Jacob Zuma to have tea with him could tell us what good they think came out of that meeting?”

‘What good came of it?’ - Derek Hanekom wants Malema to spill the tea on Nkandla meeting

It remains to be seen if the EFF leader will respond to Hanekom.
Politics
11 months ago

Niehaus told Hanekom that getting the inside scoop on the meeting was as easy as dialling the EFF.

“Why don’t you meet up with the EFF at your favourite meeting place at Eastgate Mugg & Bean, where you were plotting to oust [former] president Jacob Zuma? Perhaps if you ask nicely, Julius Malema may tell you - but I doubt it because this time you don’t have a list of betrayers to trade with.”

Why don't you meet up with the #EFF at your favourite meeting place at Eastgate Mugg & Bean, where you were plotting to oust @PresJGZuma. Perhaps if you ask nicely @Julius_S_Malema may tell you... But I doubt, because this time you don't have a list of betrayers to trade with.

What we know about the EFF and Hanekom’s ‘friendship’

Said Malema: “Today he calls us fascists, but Derek Hanekom plotted with the EFF to bring down president Zuma. The same goes with Solly Mapaila [deputy general secretary of the SA Communist Party].”

EFF deputy president Floyd Shivambu backed Malema’s claims and said Hanekom “kept  harassing the EFF leadership with calls to give the names of MPs who were going to vote with the opposition to remove Zuma”.

Hanekom did not deny the claims and said it was for the good of the ANC.

“At the time, they were deeply concerned about the state of the country,” he said.

Umkhonto we Sizwe Military Veterans Association spokesperson Carl Niehaus has laughed off suggestions that members of the organisation should be ...
Politics
11 months ago