'They sent the minister of police to fraternise with someone who defied an order of the Constitutional Court.' 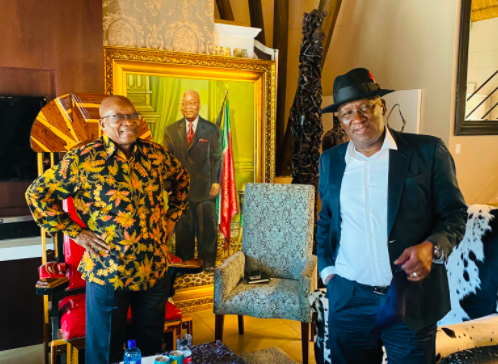 Cele had a three-hour-long meeting with Zuma. This is Zuma's third meeting after his tea date with EFF leader Julius Malema and uMkhonto weSizwe Military Veterans Association (MKMVA).

The agenda for the meeting is yet to be disclosed, but it comes as Zuma faces the possibility of jail time over his defiance of a Constitutional Court order to appear before the state capture inquiry.

Cele's spokesperson Lirandzu Themba said Cele would relay details of the meeting to the ANC.

[UPDATE]Minister Gen Bheki Cele has concluded his visit with Former President @PresJGZuma in #Nkandla which started this morning at 11:00 and will update @MYANC leadership on the outcome of his visit first.

According to videos shared on social media, drama erupted at Nkandla as Cele’s police convoy was initially blocked by members of the MKMVA, who have been stationed outside Zuma's home this week.

Cele's security detail managed to negotiate entrance to the Zuma homestead with the vets.

Bheki Cele visiting president Jacob Zuma in Nkandla and his vehicles are stopped from entering by the MKMVA pic.twitter.com/J5YuZ1MAJz

After the meeting, Zuma's daughter Duduzile took to social media, saying that the visit featured no tea, just “great conversation and laughs”.

She revealed that the pair joked about Cele being the one who arrests Zuma, should a warrant be issued in his name.

“Laughs were shared among comrades, one of them being, should an arrest warrant be issued, it is the minister that would come and fetch Zuma,” she said.

No #NkandlaTea was served but great conversations and laughs were shared amongst Comrades, one of them being, should an arrest warrant be issued, it is the Minster that would come and fetch @PresJGZuma 🤣 pic.twitter.com/ddFuAoC2TN

After a three hour meeting with former President Jacob Zuma police minister Bheki Cele and his entourage emerge from Zuma’s Nkandla home and make a quiet exit without addressing the media outside ⁦@TimesLIVE⁩ pic.twitter.com/mtZFOf6Gr2

On social media, many speculated on what the meeting was about, while others suggested that Zuma had a “revolutionary shirt” and pointed out that he had worn it when hosting Malema and rapper Cassper Nyovest previously.

A whole Minister of Police, Bheki Cele willingly visits the former President, Jacob Zuma. Its almost like they don't care how this looks to the public... Ya ne 👀 pic.twitter.com/qeZBGGsCmk

Zuma would be rotting in prison right now if Bheki Cele had found bevs at that ugly homestead.

Bheki Cele decided to pay Jacob Zuma a visit, before it was Julius Malema.
So what if as South Africa we all decided to go to Nkandla and see uBaba? pic.twitter.com/IT0zTgrWII

The one thing I have realised is that everyone who goes to Nkandla comes out singing the same tune with Zuma lol - maybe it’s the tea that’s offered. I mean even NFP, came out to say - we will support Zuma after their tea meeting. Bheki Cele over to you sir lol.

They sent the Minister of Police to fraternise with someone who defied an order of the Constitutional Court. It doesn’t get more ridiculous than this.

A whole former President of Mzansi Jacob Zuma uba-enterisha bonke (Malema, Nyovest & Bheki Cele) with just one shirt and wena you want a new outfit for every occasion 😂😂😂 pic.twitter.com/N3TDmO6PRh

Can we talk about this revolutionary shirt that Zuma wears when people visit him at Inkandla . Amongst those visitors are Malema ,Cassper and Bheki Cele ..... pic.twitter.com/ZNset2NI4g

Cele doesn't want to spill the tea after Zuma meeting, but daughter Dudu provides the snacks

Police minister Bheki Cele had a three-hour long meeting with former president Jacob Zuma at his Nkandla home in northern KwaZulu-Natal on Thursday.
Politics
11 months ago